Imlay City Clerk/Treasurer Dawn Sawicki-Franz said Friday that her office has been deluged with such requests for Tuesday’s August 4 primary election.

Whether it is voters’ concerns about in-person voting during the COVID-19 pandemic, or an increased interest and willingness to vote in absentia, the shift is notable.

Indeed, the relative ease of voting in-absentia could, in time, even become the preference of many voters. 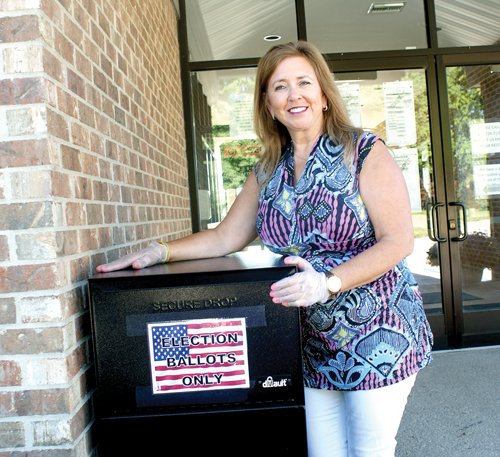 Sawicki-Franz said those who prefer to vote in-person on Tuesday, Aug. 4, will be required to adhere to COVID-19 safety protocol, including wearing a mask and observing the familiar six-foot social distancing requirement.

She added that all election workers will be required to observe the same COVID safety protocol, and that safety shields and will be available.

Lapeer County Clerk Theresa Spencer said Monday, that Sawicki-Franz’s report is consistent with what she has been hearing from other Lapeer County clerks.

“Many of the local clerks have said they are experiencing an increase in the absentee votes,” Spencer said.

To satisfy her own curiosity, Spencer has sent out emails to each of the clerks, seeking comparisons in AV vote requests between the August 2016 primary and those, thus far, from the August 2020 primary.

“I’ll be interested in seeing the difference,” she said. “I expect there will be a large increase.”

Spencer attributes the large increase in AV ballot requests to lingering concerns about the COVID-19 virus.

“We think people may be are opting for the AV ballots due to COVID,” Spencer said. “It could also be that more people are understanding that ‘no reason’ AV is now a voting option for them, since the passage of Proposal 18-3.”

Spencer said the proposal’s passage, coupled with the State of Michigan sending out absentee ballot applications to all registered voters not already on
the permanent list, may also be factors for the massive swing to AV ballots in the 2020 election.

“It would be hard right now to dissect exactly which reasons prevailed for the uptick in AV ballot requests,” she said.

Spencer added that the State of Michigan’s Bureau of Elections has provided some personal protection equipment (PPE) for local jurisdictions, and recommended that local clerks add other PPE for their particular precinct.
“A number of our local clerks have purchased or created ‘sneeze guards’ for placement between the election workers and voters on Election Day,” Spencer said, “as well as taking other precautionary measures to keep everyone safe, comfortable and welcome for those coming to the polls in person on Election Day.”