IMLAY CITY — Madison Ross, who will be a senior at Imlay City High School this upcoming school year, won a two-year-old Rodney Yost Broadaxe Ranch Colt in a national competition earlier this year.

He is a fourth generation South Dakota Rancher, Breeder and Horse Trainer.

Yost is a five time champion of the Crosswinds Ranch Colt Training Challenge and has won multiple Ranch Horse Futurity Competitions. He is one of the most sought after horsemanship clinicians and trainers in the nation. 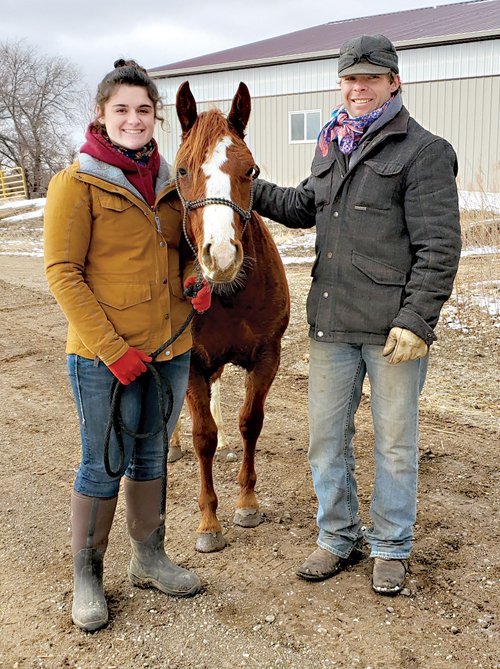 Madison Ross poses for a photo with her colt and highly regarded trainer Rodney Yost.

The competition was initiated five years ago to give participants an opportunity to win a Broadaxe Ranch Breed Colt for $1 to raise, train and use in any discipline.

Participants must be 16 years or younger and generate a video as their application. Videos must show prior horse experience, horse related goals, why you believe you deserve the prospect and future plans/goals for the prospect should you be the winner. The video must demonstrate horsemanship skills/abilities and any accomplishments.

You must show and prove adequate facilities to safely train, care for, raise and train the prospect. You must also provide knowledgeable individuals who will assist you throughout the process.

Applicants are given two weeks to generate the video. They are then reviewed and a select group of finalists are chosen for the final selection. From there the winner is selected by a blind draw at the annual Rapid City Rodeo in February during the final Rodney Yost demonstration.

This year’s prospect was a 2018 Broadaxe Ranch colt by Little Catstep.

Ross generated and submitted her video in late December of 2019.

In mid-January, she learned that she was chosen as a finalist.

On February 8, the Rapid City Rodeo held a live feed of the blind draw where Rodney’s daughter was handed a bucket to draw the name of this year’s winner. It was there Madison’s name was announced out of all of the highly qualified applicants.

In an interview with Rodeo Zone following the announcement, Rodney Yost had this to say.

“As a finalist who did not win last year we kept an eye on her,” Yost said. “She has a ton of effort and ability,” he noted.

“Then not to give up and come back again, that tells us a lot about an applicant. Attitude, goals and mindset play a big part in our selection.”

Following the announcement, the morning after varsity basketball regionals and and just as the schools were being closed due to Covid-19, Madison made the trip to South Dakota where she spent the day at Broadaxe Ranch with Rodney and the colt. He spent the day working her and Spot Me (the colt) going through his techniques training and her first ride on the colt. She was left with an open invitation to come back to the ranch and work him anytime.

“The whole experience has been crazy,” Madison said. “I never thought it was actually a possibility for me to be in the finals let alone win,” she noted.

“After making the finals last year and not being selected it was tough to come back and try again this year, but Rodney reached out to me after last year’s competition with great feedback and encouragement to keep pushing toward my goals and his hope that I would apply again. With the push of everyone around me, I pulled together and applied again. I was thrilled to make the finals, but honestly did not put a lot of weight into it knowing there were so many great applicants.”

She then recalled the day of the draw.

“We were riding at the barn (Gilliland Home and Cattle Company) and huddled around my phone to hear it live,” Ross remembered. “We were shocked to hear my name and could not believe it,” she noted.

“The next weeks were a bit of a blur, but exciting to connect with Rodney and build a relationship. I feel so overwhelmed and blessed to have been given this opportunity. I am looking so forward to working with this colt and seeing what we can do together.”

Since getting back from South Dakota, Madison has been working daily with the colt who she now calls Trip. They are making great progress, aiming for the future.