Fall sports to go on as planned 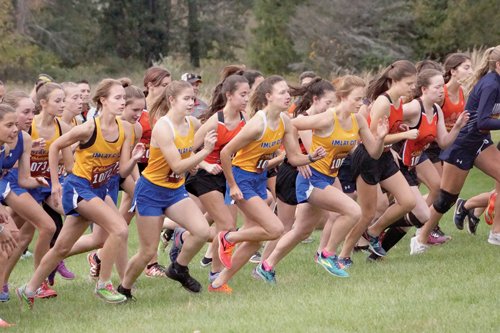 Runners from the Imlay City and Almont cross country teams break from the starting-line during a meet last fall.

TRI-CITY AREA — Following months of speculation, a decision has finally been made.

The MHSAA Representative Council, the Association’s 19-member legislative body, met virtually with MHSAA staff last Wednesday (July 15) to discuss a series of ideas for playing sports starting in August. The Council will meet again July 29 for further discussion. Currently high school football practices are slated to get underway August 10, with all other fall sports to start practice August 12.

The MHSAA is moving forward with a plan that calls for fall sports to be started and played as scheduled. If the situation deems it necessary, the start of some or all fall sports practices or competitions could be delayed. The next step in the plan’s progression calls for lower risk fall sports that can be played to be completed, with higher risk fall sports postponed until later in the school year. If all fall sports must be suspended, they will be rescheduled during a reconfigured calendar that would see winter sports begin in November followed by the conclusion of fall and spring seasons potentially extending into July 2021.

Additionally, the Council considered a concept that would swap traditional fall and spring sports, but determined that was not a feasible plan. Football, girls’ volleyball, girls’ swimming and diving and boys’ soccer during the fall are considered moderate or high risk sports because they include athletes in close contact or are played indoors; they were considered the impetus for potentially switching fall sports to spring. But traditional spring sports, girls’ soccer plus girls’ and boys’ lacrosse, carry similar risk, and that negated the value of making that full season switch. Moving only selected spring sports, like all low risk to fall, was not considered sound because it would force student-athletes to pick between sports they have previously played.

Plans remain reliant on progression by schools and regions across the state according to Governor Gretchen Whitmer’s MI Safe Start Plan. Currently two regions are in Phase 5, which allow for limited indoor activity, while the rest are in Phase 4 and are unable to host indoor training, practice or competition.

“Our student athletes just want to play and we have gone far too long without them playing,” MHSAA Executive Director Mark Uyl said. “But, doing so safely remains the priority,” he noted.

Uyl went on to say that the MHSAA is grateful to the governor for the opportunity to build the schedule and policies for returning sports to schools.

“We will continue to support her directives and that of the state and local departments as we work to create the safest environment for all involved in our activities,” he noted.