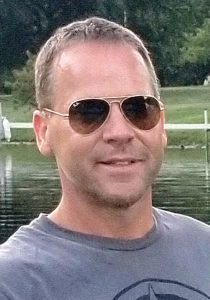 Todd Daniel, age 49, of White Lake, MI, formerly of Almont, died Wednesday, July 8, 2020 in White Lake, MI. Todd Edward Daniel was born January 12, 1971 in Royal Oak, MI. He was the son of Norman and Aileen (Boik) Daniel. Todd grew up in Almont and graduated from Almont High School, Class of 1989. Todd was a talented athlete; he played tennis in high school and at Grand Valley State University. Todd received his Bachelor’s Degree at Grand Valley State University and later his Master’s Degree from the University of Michigan.

Todd loved spending time with his children. He enjoyed all outdoor activities; especially hunting with his brown labrador retrievers.

A Mass of Christian burial will be held at 11 a.m. on Thursday, July 23, 2020 at Sacred Heart Catholic Church, 700 Maple Vista, Imlay City, MI. The Reverend Father Noel Cornelio will be officiating.

The family will be available for visitation 2-5 and 6-8 p.m. Wednesday, July 22, 2020 at Muir Brothers Funeral Home of Imlay City. For those wishing to make memorial contributions; they may be made to Jeff Daniel, as he is establishing a scholarship fund for Todd’s children.

Please be sure to sign the online register book at muirbrothersfh.com to share your
memories and condolences with the Daniel family.