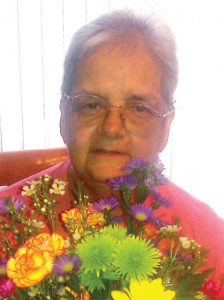 Lisbeth Irene Salyer, 73, passed away July 14, 2020 at United Hospice Service Residence in Marlette. She was born July 26, 1946 in Pontiac the daughter of Thomas and Marvel Henry. She graduated from Pontiac High School in 1964. Lisbeth enjoyed sewing, crocheting, and baking. She loved being a grandmother and spending time with her family and friends. She will be missed by many.

She is survived by her beloved children, Suzanne (Bryan) Frazier of Marlette, Laura (Tim) Nestell of Washington Twp., Charity (Bryan) Hill of Washington Twp., Eddie Salyer Jr. of Ohio, Barbara Brown of Ohio and Thomas (Mallory) Salyer of Almont; ten beloved grandchildren; and 6 beloved great-grandchildren. She is also survived by her sister, Marti (Chuck) Precourt of Texas; and many nieces and nephews.

The funeral arrangements were entrusted to the Muir Funeral Home and Celebration of Life Center, 2650 South VanDyke, Imlay City, Michigan 48444.

The online guestbook can be found at Muirfh.com.