LAPEER COUNTY — On Tuesday, Aug. 4, Lapeer County residents will be asked to support the renewal of a reduced 0.9 millage rate to fund the Lapeer County EMS ambulance service for the next five years. The current levy stands at one mill. 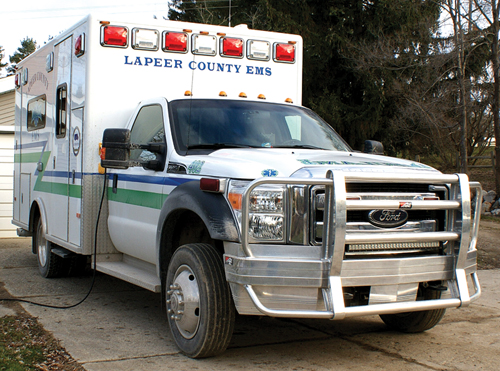 He said payroll and human resources costs (wages, taxes and benefits) amount to 73% of the agency’s annual budget.

Adams said the countywide ambulance service has met and exceeded the goals and requirements set forth for the agency in the 2016 millage proposal.

He pointed out that LCEMS had originally committed to having seven ambulance stations and now has eight.

Additionally, Adams
said the ambulance service has increased road staff substantially in the past four years.

“We have doubled our full-time road staff and reduced our office administration staff,” said Adams. “We have invested over $1 million in capital purchases, including ambulances, equipment, and land for development.

“We’ve negotiated a competitive wage and benefit contract with our employee union, and we are currently fully-staffed in a time of shortages in our industry.”

Adams added that LCEMS has waived more than $1 million of out of pocket insurance copays and deductibles for residents.

“Not only is it waived,” he said, “the individual gets credit for paying it; as though it was paid with the insurance company.”

Since 1969, Lapeer County EMS has been a community-owned agency that provides emergency medical care and transport through a combination of tax funding and transport revenues.