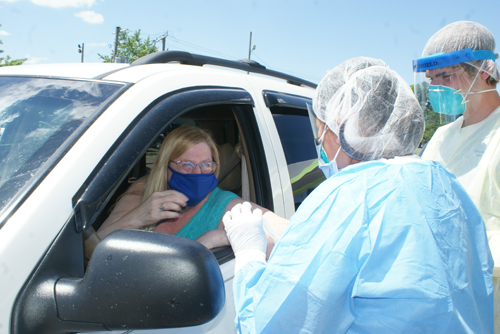 Almont resident Laura Joseph was among those who lined up at the Eastern Michigan State Fairgrounds on Tuesday for free coronavirus testing provided by Lapeer County health professionals.

IMLAY CITY — A steady stream of cars rolled into the Eastern Michigan State Fairgrounds Tuesday (June 30) afternoon, whose occupants sought to be tested for the coronavirus.

The free testing at the fairgrounds was provided by the Lapeer County Health Department following a recent spike in COVID-19 cases in the Imlay City area.

Colton said motorists began lining up at the fairgrounds for testing at 11 a.m.; an hour prior to the scheduled testing.

By 1 p.m., dozens had already been tested, with the expectation that many more would arrive within the three-hour testing window.

Colton said test results were expected to be available within 3-5 days, pending delays due to the Fourth of July weekend.

“This is a tremendous turnout,” Colton said. “Particularly since this was just coordinated on Friday, and now here we are on Tuesday.”

“We’ll stay here and test until we run out of supplies,” she said.

Among those being tested was Laura Joseph of Almont, who was pleased to take advantage of the nearby COVID-19 testing opportunity.

“I read about this and had been wanting to be tested,” Joseph said. “This location was close and convenient, and I feel I have nothing to lose by getting tested.”

Marilyn Szost, who has served as a Community Health Services/Emergency Preparedness Coordinator with the Lapeer County Health Department since 2014, volunteered to take the test again herself.

Also on hand was Lapeer County Emergency Management Director, Mary Piornek, who was stationed inside the Fair Office, where volunteers documented and tabulated testing information.

Colton said that by 3 p.m. on Tuesday, 80 people had been tested; with all COVID-positive results to be provided by the Lapeer County Health Department.

“It was a great turnout on such short notice,” said Colton. “Our volunteers worked alongside staff from Great Lakes Bay Health Centers in uncomfortably warm conditions.

“It was a very warm day and the PPE equipment worn to protect staff really heats us up even more,” Colton admitted. “Fortunately, we were prepared and had tents for shade. We were also able to switch out staff for water breaks and to take breaks from the heat.

“The response from the community was wonderful,” she said. “Many of the people thanked the staff and shared appreciation for the drive-up testing site coming to their community.
“They also had the chance to ask questions related to COVID-19 from our medical staff,” said Colton. “Everyone involved worked so hard to put this together.”

Thus far, there are no current plans for a second free testing day at the fairgrounds.