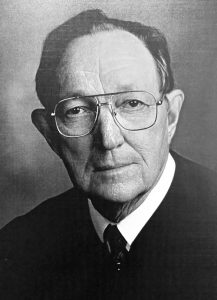 James married Ann Muir of Imlay City in August of 1950. He practiced law in Vassar, Michigan until 1965 when he was elected as Circuit Judge of the 40th Judicial District of Michigan consisting of Lapeer and Tuscola counties. During the next nine years he held court in Caro and Lapeer and in eight other Michigan courts including the Michigan Court of Appeals. In 1974, Judge Churchill was nominated as United States District Court Judge for the Eastern District of Michigan by President Gerald Ford to fill a vacancy created by the death of Federal Judge Stephen J. Roth of Flint, whom Judge Churchill admired. His nomination was confirmed by the U.S Senate. Judge Churchill was sworn in as a Federal Judge on December 29, 1974. Thereafter, he presided at trials in federal courts in Detroit, Flint, Bay City, and on a few occasions in Tennessee. In 1981 and 1982, while holding court in Detroit, he taught a night class
concerning Federal Court Jurisdiction as an adjunct professor at the Detroit College of Law. On December 30, 1989 he retired from active service as a federal judge. In 1991, Saginaw Valley State University awarded Judge Churchill an Honorary Doctor of Law Degree. During his professional career, Judge Churchill enjoyed association with many staff members, law clerks, fellow judges and attorneys.

He and Ann enjoyed their many friends in Imlay City, Vassar, Grosse Pointe, Bay City, Harbor Springs, and elsewhere. Judge Churchill enjoyed golf, sailing, reading, and following the Detroit Tigers and especially the Michigan Wolverines. He was always in awe of natural history, geology, and astronomy and loved nature and taught others who would try to keep up with him on the wonder of it all. He so enjoyed and loved his family but especially his wife of nearly 70 years, Ann, and they all deeply loved and admired him. Even with his accomplishments, wisdom, and brilliance, they were always his greatest source of happiness.

He was preceded in death by his parents; and his brothers, Stuart Winston Churchill and Robert Howard Churchill.