How does your garden grow?

IMLAY CITY — The creation of a new school garden this spring hasn’t exactly gone as planned but the tomato plants don’t seem to care. They and a dozen other kinds of vegetables, fruits, flowers and herbs are flourishing in a collection of raised beds on the site of former tennis courts behind Weston Elementary School thanks to the expertise of Scott Aldridge. The experienced home gardener volunteered his time last year to help create the space and dove right in, designing the layout and soliciting donations. This spring, when it came time to actually start the process of readying plants for the garden, the coronavirus pandemic upended his original plans but you wouldn’t know it looking at the lush space now.

“The kids left in such abrupt circumstances and they’ll be coming back to a lot of unknowns this fall,” Scott said.

“I hope the gardens can give them some hope and a little spark. It’s something new for them to look forward to.” 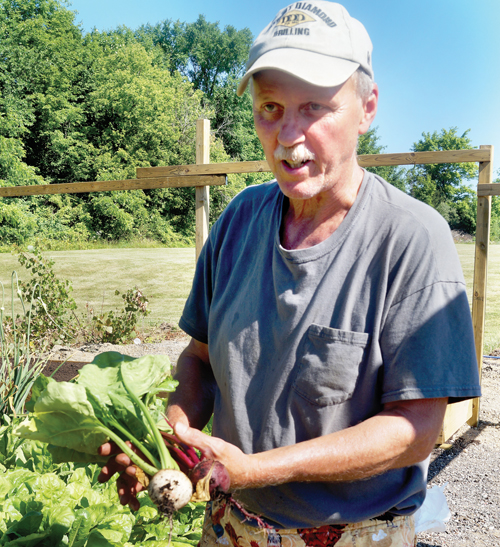 “We had plans to start seeds with the kids,” he recalled.

When classes were canceled in mid-March for what officials hoped would be just two weeks, Scott sewed seed at home, hoping that they could resume their growing when students returned in April.

“I started six to seven flats of vegetables at home,” Scott said.

When state officials decided the school year should be completely suspended, Scott needed somewhere to plant those starts so he headed to the school garden beds.

The garden has already produced a crop of spinach that Scott harvested and shared with school staff. The beets are sizing up well, the potatoes are blooming and cole crops–like broccoli and cauliflower–are starting to form heads. The rest of the garden lineup includes asparagus, raspberries, garlic, peppers, basil, cabbage, kale, kohlrabi and winter and summer squash. Lending some beauty to the garden will be zinnias, sunflowers, sweet peas, nasturtiums and morning glory. Once construction of the outside fence is complete, vining crops like cucumber and pole beans will be planted so they can utilize the vertical space to grow.

“A lot of people have been stopping by to check it out. They are intrigued,” Scott said.

Local Scotts employees have been keeping tabs on the progress too and even dropped off more donated soil.

Besides growing plants, Scott has tackled a lot of the garden’s construction-related work too. With the help from family and friends, Scott has dug post holes for an exterior fence, installed growing panels, built the frame for a storage shed and much more.

Helping him make that all possible has been his brother-in-law, Doug Markwardt and friends Mike Megel, Dean Aune, Melissa Aune and school board member Greg Dennis.

On Thursday, high school seniors Jacob Webb and Aidan Cuthbertson lent Aldridge a hand in the garden, using rakes and shovels to pick up rocks and smooth the walkways between the raised beds. That morning Kappen Tree Service delivered a load of donated mulch to the garden site that they would begin spreading once the prep work was complete.

The teens, who know Scott through church, said they were happy to volunteer their time.

“We know the difference now between soil and dirt,” Aidan said.

“According to Mr. Aldridge, soil is what you plant in and dirt is the stuff stuck to your shoes.”

Scott hopes to have the majority of the garden’s infrastructure complete by mid-July and he would welcome any help from the community to make that happen.

“We still have a storage shed to put a roof and sides on, there’s fence to put up and mulch to spread out,” he said.

The school district has said they hope to utilize the gardens within their science curriculum; use produce in the school’s food service program and eventually develop a community garden concept.