A history in pictures 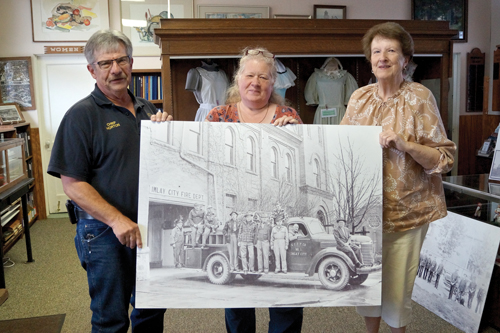 IMLAY CITY — The Imlay City Fire Department might have a new home but soon there will be reminders of their past hanging on the walls.

Recently the Imlay City Historical Society donated three vintage photos to the department to display at their newly constructed hall on E. Borland Road. The trio of black and white enlarged photos includes a snapshot of the city’s first bucket brigade and two others, taken by
Life magazine photographers, of the 1949 volunteer
department.

“We have a community and training room in the new hall and these pictures will be perfect in there,” an appreciative Chief Rick Horton told the society’s Carla Jepsen and Marilyn Swihart upon receiving the donation.

According to a history of Imlay City’s volunteer fire department, as compiled by the historical society, the group of firefighters first organized as a bucket brigade in 1876, six years after the city was founded.

The group’s first engine house was built on Bancroft Street and it doubled as the city’s jail. There, the 50 volunteers, stored their pumper, hand engine, hose carts and a ladder “truck.” When needed, they drew water from cisterns located around town. As the name suggests, a bucket brigade consisted of firefighters hand pumping water into pails which were moved hand to hand down a line and eventually up a ladder to whoever was stationed at the top of a burning building.

Around the turn of the century, the department relocated to the new town hall at the corner of Fourth St. and Almont Ave. In subsequent years, the city began installing water mains and the fire department purchased their first fire truck in 1927, a LaFrance.

In the 1947, the Goodwill Community Fire Truck Company was formed. Subscribers paid $50 which entitled them to one fire run. Thanks to the support of nearly 300 subscribers in Attica, Arcadia, Goodland and Imlay, the company was able to purchase a new truck, an International equipped with a modern pumper. This truck is prominently featured in the Life magazine photos and the Goodwill Community Fire Truck Company initials (GCFTC) are visible on the truck’s doors.

In 1968, the fire department got its own hall. The six-bay building on east Third Street has been the organization’s most recent home since then. In 1986, an addition was made to the hall to better accommodate the department’s equipment.

Another piece of Imlay City Fire Department history making a move to the new hall is the city’s original fire bell dating back to 1876. The bell had its first home in the Bancroft Street engine house in an eight-foot steeple. The bell was moved to the town hall in the early 1900s and did its duty until sirens were installed in the building. The bell was taken out of storage and installed in the Third Street fire hall when it was constructed. Soon, it will have a new home in the Borland Road facility.

Ribbon cutting ceremonies at the new fire hall were held June 30 and the department anticipates fully moving into their new space soon.

The photos belong to a collection of Imlay City Fire Department items in the possession of the Imlay City Historical Museum. Besides photos, the museum has fire gear, a plaque honoring members of the department’s 25 Year Club and more. They were featured in a special ‘Meet the Heroes’ exhibit at the museum in 2019.