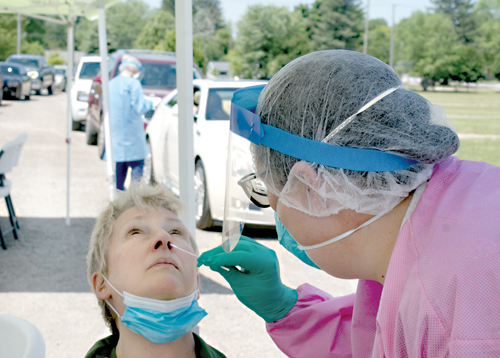 Lapeer County’s case count grows by 21;
St. Clair County’s up by 30 in past week

TRI-CITY AREA — Lapeer County’s COVID-19 case count continues to increase but not as sharply as in prior weeks.

As of Monday, June 29, the Lapeer County Health Department was reporting 249 positive virus cases. That’s an increase of 21 cases in one week’s time.

The week prior, Lapeer County saw 34 new cases with county officials confirming a localized outbreak among the migrant worker population.

Of those 249 total cases, 156 are considered to have recovered from the virus as of June 29, a gain of seven from the prior week.

There have been no virus-related deaths in Lapeer County in recent weeks.

Yesterday, June 30, the health department collaborated with Great Lakes Bay Health Center to offer a COVID-19 pop up testing event at the Eastern Michigan State Fairgrounds from 12-3 p.m. Early in the day, there was a steady stream of vehicles pulling into the fairgrounds.

In mid-June, a cluster of eight infections was identified among seasonal agriculture workers in the Imlay City area. Following additional testing, 24 other workers were found to have the virus.

Lapeer County Health Department Director Kathy Haskins said public health officials chose to identify the cluster of cases as coming from this group of seasonal workers in an attempt to halt the spread of false information that had reportedly started to spread in the community.

“We felt that it was necessary to provide accurate, basic information rather than allow wild speculation to fly, which we had heard,” Haskins said.

They are not sharing any further details regarding where the workers are employed or living.

“We would hope that the public would respect these businesses and individuals as well. We hope that people realize how valuable this work force is to our businesses and community,” Haskins said.

Public health nurses, the Great Lakes Bay Health Center and the Hispanic Service Center were assisting the workers to self-quarantine.

Prior to the cluster of cases, the health department has declined to release location related details regarding positive cases.

Haskins continues to urge residents to wear face masks while in indoor public settings and to practice social distancing.

“You may think you’re young and can weather this out. However, you could also be the link that carries the virus to those who are not as able to fight it off. Please consider using protections for the sake of each other,” she said.

In one week’s time, St. Clair County has reported 30 new positive cases and one additional death. Their total case count as of Monday, June 29, was 560 to date with 50 deaths. The St. Clair County Health Department said 450 of those 560 cases are considered recovered.