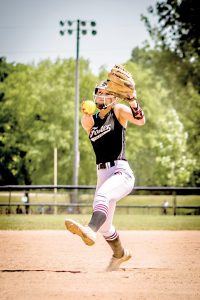 Jaya Forti delivers a pitch to home plate for Foster Oilers 16U softball team at the Frankenmuth Tournament.

The squad started things off with a 2-0 loss to Michigan Bolts on Friday, June 19.

Later that day, Foster Oilers was handed a 9-3 setback by Michigan Bolts Blue.