CAPAC — The school board has opted to dip into their savings instead of making significant budget cuts for the coming school year.

At their June 25 meeting, members approved proposed budgets that will result in their fund balance dropping from 16.5 percent this year to 7.1 percent at the close of the ’20-21 school year.

This school year, the district was able to add more than $158,000 to their savings account, pushing their fund balance up to $1.4 million.

Jennifer Daws, Capac Community Schools Business Manager, said the district realized approximately $45,000 in savings from the cancellation of spring sports. All extracurricular activities were postponed when Governor Gretchen Whitmer closed schools in March due to the coronavirus pandemic.

Staff looked for other areas to save funds during the closure too when it came to things like heating, cooling and electricity. 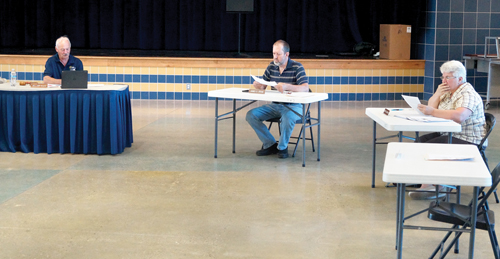 The Capac School Board met in person on Thursday, but remained socially distant, to approve the district’s budget for the coming year. President Bill Ellis, Vice President Jim Crane and trustee Marie Killingbeck look over the agenda before the meeting began.

The ’19-20 general fund budget wrapped up with $9.1 million in revenues and $8.9 million in expenditures.

Schools will receive less state aid in the coming year due to sharp declines in tax revenues due to the business closures and other restrictions during the Stay Home Stay Safe order issued in response to the pandemic.

Supt. Jeff Terpenning said district leaders wanted the budgeting process to be transparent and include all the interested parties.

“Our finance committee has been meeting with union leaders so that everyone’s aware of what’s going on,” he said.

At Thursday’s meeting, the board considered but ultimately voted down one proposed budget cut. The elimination of weekend transportation for student events would have amounted to $12,000 in savings for the coming year but board members said their concerns over potential student safety were too great to make the change.