TRI-CITY AREA — Attack claimed a first-place finish at the 12U NSA Michigan State Tournament which was contested in Grand Blanc recently.

The team began their title-producing run with a 12-0 win against Batbusters on Friday, June 19.

Later that day, Attack raised their mark to 2-0 thanks to a 12-1 victory over Midland Lady Explorers.

Attack then registered a 9-2 triumph against Kalamazoo Klash on Saturday, June 20.

That would prove their only game that day. 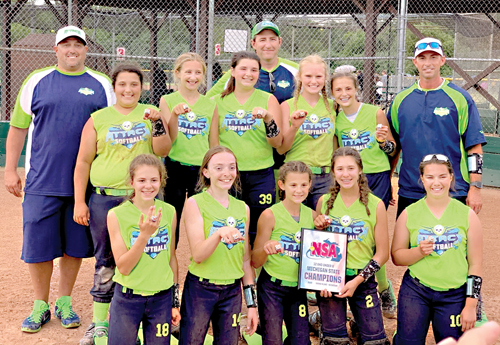 Attack’s 12U team began play on Sunday, June 21 with a 4-3 setback to Michigan Expos.

The team would bounce back with a 5-1 win over Kalamazoo Klash and an 11-3 victory against Michigan Expos.

Those outcomes placed them in the title tilt versus Michigan Expos, a game they concluded up by a 7-1 scoreboard count.

Sophia Helm (Swartz Creek) led the team with 15 hits, 13 RBI and 10 runs scored over the weekend. She was backed by Oxford’s Isabella Makarewicz (11 hits) and Algonac’s Jaycee Reams (three doubles and two triples).