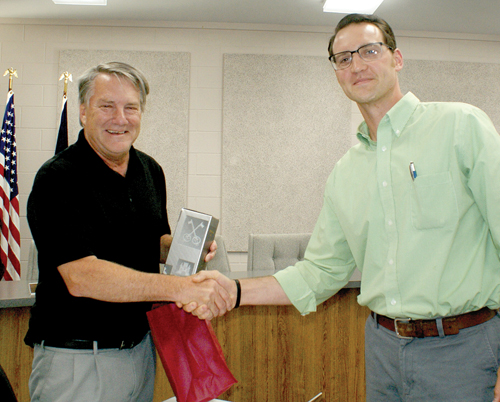 IMLAY CITY — The June 16 Imlay City Commission meeting was the last for Manager Tom Youatt, who officially retires on June 30.

But before bidding adieu, Youatt updated commissioners on the status of the new fire hall on E. Borland Rd., before they signed off on last-minute change orders and final payments to the project’s contractor, Superior Contracting Group, LLC of Dryden.

Youatt noted that the total cost for the fire hall will amount to a little less than $2.9 million, about $135,000 less than expected.

The original cost of the fire hall was expected to be more than $3 million, but the city qualified for a lower interest rate on its loan due in part to its A-plus rating from Standard & Poors.

A sizable number of city employees, former commissioners, Fire Chief Rick Horton and others were on hand to thank and offer their well wishes to Youatt.
Horton recalled having been notified of his appointment as fire chief by Youatt on Christmas Eve.

“That was very important to me and I appreciated the support,” said Horton. “We firefighters appreciate everything you’ve done for us, and especially for our new fire hall. Good luck to you and Kay, and thank you for your support.”

Also offering public thanks were former Mayor Walt Bargen, who recalled Youatt’s interview, when to Bargen’s recollection, he told commissioners he was going to be the “best manager in the State of Michigan.”

“Well, I think you’ve proved that you were the best,” said Bargen.

“You’re a great professional and I wish you the best,” said Bishop.

Imlay City Mayor Joi Kempf read aloud a proclamation acknowledging Youatt for his contributions and for the leadership he provided the City of Imlay City over the past six years.

“Tom’s pursuit of a Fire Hall Millage and strong supervision has resulted in construction of an excellent fire hall that will serve the citizens of Imlay City for years to come,” Kempf said.

“The City of Imlay and its commission does hereby recognize, commend and sincerely thank Mr. Tom Youatt for his outstanding contributions and excellent service to the citizens of Imlay City, which he provided with integrity, honor and professionalism.”

The meeting concluded with a few tears of emotion, some fist-bumps, a handshake and some heartfelt words offered up by attendees and commissioners, followed by a few from Youatt himself.

“It’s been a pleasure to have worked with great people and to have had the opportunity to serve the residents of Imlay City,” said Youatt. “I appreciate the support I’ve gotten from our department heads, city office staff, the various commissioners and from two outstanding mayors,” he continued.

“To have been able to work together as a team in Imlay City is something we can all be proud of. Looking back at the past six years — and realizing now that it’s coming to an end, is difficult.”