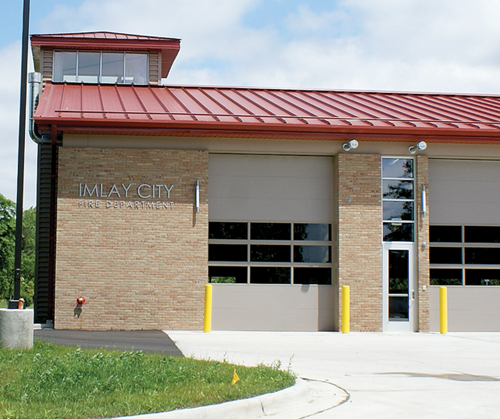 The construction of the new hall was made possible in 2018 when voters approved a 20 year millage request.

All are welcome to tour new facility at 571 E. Borland Rd.

The ribbon cutting officially marks the completion of the $3 million hall and an opportunity for city officials to acknowledge residents for their support of the project.

In August 2018, residents approved a 20-year, 2.0463-mill tax increase to purchase the land from Michigan Dept. of Natural Resources (DNR)
and to construct the
new hall.

While there have been setbacks in the construction process due to weather and other construction-related delays, the new building is expected to meet the needs of firefighters and Imlay City residents for many years to come.

In recent years, city officials have described the old 1967-vintage fire hall on Third Street downtown as having outlived its usefulness and becoming obsolete.

Both Youatt and Fire Chief Rick Horton expressed their appreciation to Imlay City residents and city commissions, past and present.

“This community has strongly supported the new fire hall project,” said Youatt. “We hope a lot of people will turn out Friday to take a look and walk through this beautiful new facility.

“This building should serve our firefighters and the citizens of Imlay City for many years to come,” he said. “When looking back, I think this project will be one we can all be proud of.”

“The Imlay City Fire Department has always been very fortunate to have the needed support from our residents and the City Commission,” said Chief Horton. “This new fire hall is an example of the support everyone has given the fire department.

“The city leaders and the commission saw a need and acted on it and made it a reality,” he continued. “The members of the Imlay City Fire Department appreciate everyone’s support.”