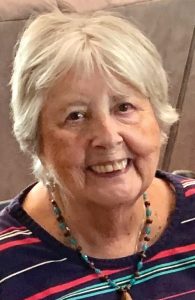 On a hot day in July 1943, a baby girl was born to Stella Alexandrovich and John Auletti. She was early, and very small, weighing only 3 pounds. They looked into her solemn eyes and saw strength there. They named her Carolyn Patricia and called her Patty.

Patty grew up in the greater Detroit area. Times were hard for the immigrant family and Patty’s childhood was turbulent. Her parents divorced, and Patty’s mom remarried. Her stepfather was an alcoholic and now her mother too was drinking heavily. Her father also remarried and had a son, Johnny. As a young girl, the challenges she faced shaped her into the kind and caring person she became.

Patty was never very good in school, but tried her best, and escaped the chaos at home when she could with friends and extended family. During her junior year, she went on a double date. The dashing rebel with kind, gentle ways won her heart and she lied about her age in order to keep seeing Delmer Dodd.

Delmer and Pat dated for more than three years. Their romance blossomed and the couple married on October 20, 1962. The following year their first child, Natalie, was born. Their second child, Rene, arrived two years later. Pat left her job as a Big Boy waitress and concentrated on raising her children. In the little house in Warren, she did everything she could to make sure her girls had a better childhood than she did. She wanted her girls to be smart, so she read to them every day and was active in their schooling. A surprise pregnancy brought her third daughter, Victoria, into the family six years later.

Delmer and Pat wanted to move from the city, so they purchased land in Almont and proceeded to build a home there. Pat belonged to the Almont Welcome Wagon group and became a member of the First Congregational Church of Almont. She was a volunteer classroom assistant at Almont Elementary School. Pat was always donating her time and energy to her family and to others. She developed lifelong friendships and never met a stranger, striking up rousing conversations with everyone she met.

Pat married off her daughters and became a proud grandmother to six grandchildren, John, Autumn, Tasha, Anthony, Sean and Dominick. She spoiled them all, as grandmas do, with activities, love and attention. During these years the Dodd family went on yearly vacations together and Pat enjoyed traveling around the US and spending time with everyone.

As the years went on, Pat began experiencing health problems, but she did not let her condition interfere with what she wanted to do. Her beautiful smile and inner strength carried her through. She loved shopping for antiques and decorated her home beautifully. She welcomed the next generation, her great-granddaughters, Jocelynn, Aubree, Sophia and Merida.

Pat passed away peacefully in her home after a long battle with pulmonary hypertension on June 17.

A celebration of life service will be held on July 11, 2020, at 11 a.m., at the First Congregational Church of Almont with Pastor Bill King officiating. Her ashes will be placed in a private columbarium at Ferguson Cemetery in Almont.

Pat gave monetary donations to a number of charities throughout her lifetime. In lieu of flowers, those thinking of an expression of sympathy are asked to consider a donation to one of Pat’s favorite charities, the Salvation Army or the First Congregational Church of Almont.