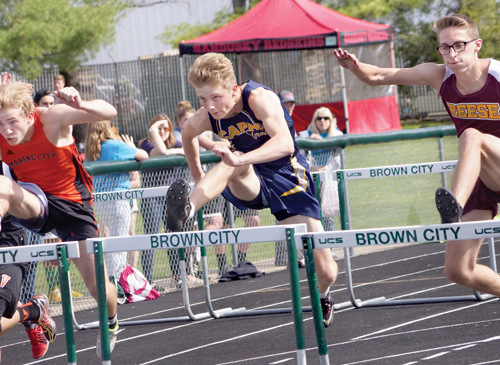 CAPAC — Capac’s Hank Barker was selected the recipient of the Thomas Gregson Award which was announced recently.

The honor is handed out each year to the school’s Top Senior Male Athlete.

It was there Barker provided a season-best 18:28.9 clocking en route to a 33rd at the Ubly Invitational.

He also claimed a sixth at the Greater Thumb Conference East League Meet hosted by Laker High School; obtained a 13th at the North Branch-based Lapeer County Press Invitational; collected a 26th during a Division 3 regional contested at Goodells County Park; placed 28th at the Wagener Park Invitational; furnished a 33rd at the Ubly Invitational; contributed a 42nd at the Marysville Invitational; generated a 43rd at Algonac Muskrat Classic; collected a 62nd at the Brown City Invitational; wound up 65th at the Holly/Duane Raffin Festival of Races; plus added a 90th at the Thumb Area Cross Country Championship in Caro.

With his help, Capac took first at the Greater Thumb Conference East League Meet and a fourth at a Division 3 regional.

Barker followed it up with a successful winter campaign with the Capac boys’ basketball team.

He finished with 171 points in 19 games, an average of 9.0 points per contest. Those numbers ranked second on the Capac ballclub.

He entered his senior year coming off a strong junior season with the Capac boys’ track team.

It was there he earned Tri-City Times All-Area first team plaudits in the 110 and 300-meter hurdles plus the 1600-meter relay.

He also landed a spot on the Tri-City Times All-Area second team lineup for his prowess as a pole vaulter.