Construction and replanting along Main St. in Almont

Schall said the project entails removal of stamped concrete, to be replaced with a darker gray concrete.

Additionally, all trees along Main Street will be removed and replaced with either a planter box containing trees or flowers or a planter box that includes a knee wall or bench. 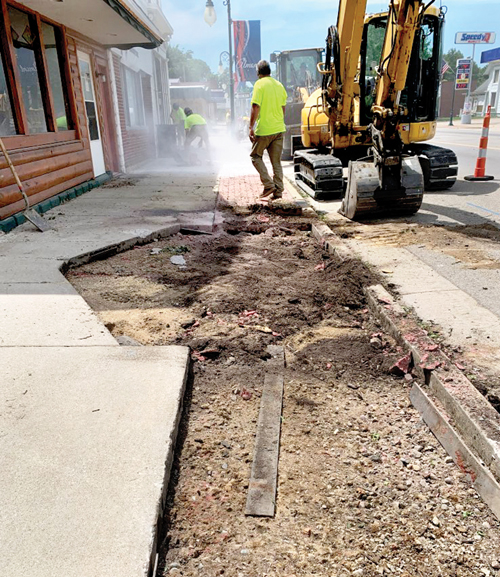 DDA Director, Kim Schall, hopes the $193,000 project will be completed within the next three weeks.

“If there is not enough room,” Schall said, “that area will be filled in with concrete to be compliant with the ADA (Americans with Disabilities Act).”

She added that the project will involve repairs to or replacement of the curb stops and water shut-off valves for businesses.

Schall said the construction bid for the project was awarded to Superior Contracting of Dryden, with construction expected to be completed within about three weeks.

“We’re ahead of schedule,” she said, “as long as everything keeps moving along at the current pace.”

Schall reminded that a significant portion of the project’s total cost will be paid with a $56,520 matching grant fund awarded the Almont DDA by the USDA in June of 2019.

The DDA’s downtown streetscape project had to be postponed last year because no one bid on the job.

At the time, Schall attributed the lack of bidders to the unusually wet weather early in the 2019 season.

She said that when contractors were finally able to return to work, they found themselves overwhelmed by existing contractual obligations, resulting in a backlog.