This past fall Winget excelled as a member of Imlay City’s cross country team, racing to a season’s-best clocking of 20:21.1 en route to an 18th at a Goodells County Park-based Division 2 regional meet. 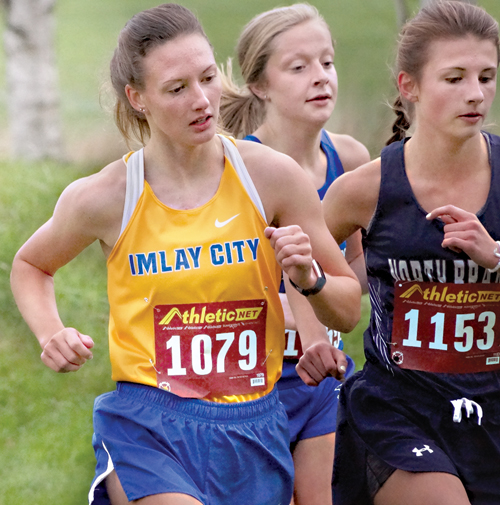 Imlay City standout McKinzie Winget looks to move up in the pack during a cross country meet this past fall.

With her assistance, Imlay City ended the year with a top finish at the Blue Water Area Conference League Meet.

The previous spring Winget also made a name for herself with the Imlay City girls’ track squad.

Her best event arguably was the 1600 relay where she joined forces with Sarah Hubbard, Jessica Denver and Robin LeFevere to post a time of 4:06.9 en route to a sixth Saturday, June 1 at the Division 2 state finals in Zeeland.
For their performance, the quartet earned All-State accolades (given to the top-eight finishers in the event).

Winget was also named to The Tri-City Times All-Area second team in the 200 and 400-meter dashes.

She has signed a letter of intent to run cross country and track at Nova Southeastern University in Florida.