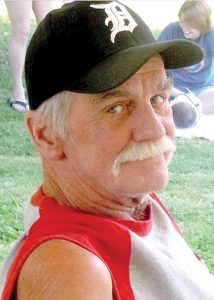 Robert Johnson, 66, of Almont, died Wednesday, June 10, 2020 at Henry Ford Macomb of Clinton Twp., MI. Robert Douglas Johnson was born December 12, 1953 in Detroit, MI. He was the son of James Alvin and Mary Ethel (Lewis) Johnson. Bob grew up in Warren, MI. He was a graduate of Fitzgerald High School, Class of 1972 in Warren, MI. Robert was a very good baseball player. He once (in the early 1970s) tried out for the Tigers baseball team.

Bob was a self-employed licensed carpenter. For 10 years he worked in the Detroit, Bad Axe and Saginaw areas as a carpenter for Grand Trunk Western Railroad. Bob enjoyed coaching and watching baseball. He taught and coached all of his children and many of the neighboring children in how to play the game. He coached Little League Baseball in Warren and Dryden.

A graveside service and burial was held Saturday, June 13, 2020 at Dryden – Mt. Pleasant Cemetery in Dryden, MI. Officiating for the graveside services was Reverend Paul Wampler, pastor of Gateway Assembly of God in Imlay City.

Please be sure to sign the online register book at muirbrothersfh.com to share your memories and condolences with the Johnson family.