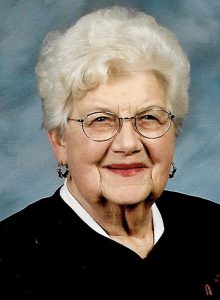 On June 3, 2020, Mabel Moore Smith passed away peacefully in her sleep. Mabel was 102 years old. Mabel was born in Adrian, MI September 28, 1917 to Leon J. and Grace (Mohr) Moore. She attended school in Detroit and later in Almont where she met James P. Smith, Jr. Mabel entered Almont High School in 1932 graduating in 1935. She went on to attend the Adrian Business College. After college graduation, Mabel worked for Pontiac Motors and when her family moved to Adrian, she moved too and was employed by the Schwarze Electric Company. In 1941 she married James P. Smith, Jr. and moved back to Almont where she lived with Jim for over fifty-five years and raised three children, James, Elizabeth and Claudia.

Mabel spent those years in many ways. She was a Sunday School teacher for over twenty years in the Almont Congregational Church. She served as a mentor to school children with reading difficulties. She was a member of the Literary Club and of the Red Hats. She was active in the Girl Scouts and the church. She was a member of the local “Order of the Eastern Star” chapter and a member of the “Daughters of the American Revolution” (D.A.R.). Mabel also worked full time in the James P. Smith Insurance Agency for many years and when Jim passed away in 1996, she assumed his position on the Henry Stevens Library Board of Directors.

As the family was growing up they traveled most of the United States camping much of the time. Bird watching was a family passion with several other friends and resulted in numerous road trips down sandy trails with the promise of a picnic somewhere. Mabel always could be counted on for enough cold fried chicken to feed the group with some leftovers for return portions for the kids.

Mabel enjoyed traveling and visited most of Europe, Australia, Germany, the Netherlands and Austria; and after Jim’s passing, the Holy Lands, Egypt and the Mediterranean with her sister-in-law, Marion Moore. One of Mabel’s passions was gardening. In 1950 she and Jim built a home on the remains of a burned out farm. The patch of land where the old “pig pen” was situated was the perfect spot for a large and productive garden when Mabel took advantage of growing virtually any crop she chose. At some point a greenhouse was added off the garage where she could get a head start on the growing season. She took full advantage starting seedlings when snow was still falling. She nurtured three pear trees and a rhubarb patch that was large enough to provide rhubarb pies to the neighborhood. Her flower gardens surrounded the home including numerous varieties and colors of iris and other flowers that bloomed all summer long.

Mabel is survived by two of her three children, daughter, Claudia Juif and son, James, both of Grayling and one daughter, Elizabeth Corl who preceded her in death in 2007. She has four granddaughters, Trisha Kelly of Nederland, TX, Susan Corl in MA, Roberta Jane Maynard of Derry, NH and through James, a step-granddaughter, Maria Thompson of Roscommon. She also has three great-grandsons and two step-great-granddaughters.