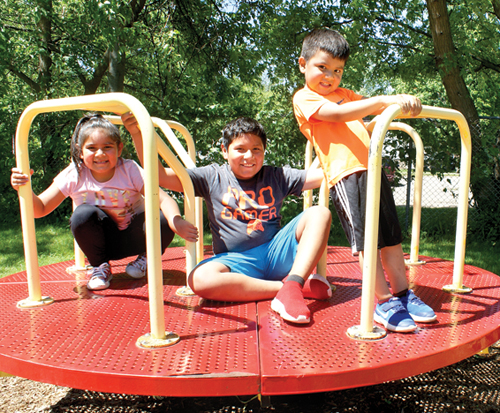 Angelique Santana, 7, Damian Leon, 10, and Matteo Hernandez, 5, are happy to be able to play again on the toys at Old School Park. Parks throughout the city have reopened for residents.

City welcomes residents and visitors to use all six parks

IMLAY CITY — The city’s parks are again open to the public.

Parks & Recreation Chairperson, Kelly Villanueva, reports that the yellow tape that had been installed on children’s playground equipment because of the coronavirus has been removed and residents and visitors are again welcome to visit any of the city’s six parks.

Though all city parks are open, Villanueva asks that everyone continue to observe social distancing measures to help minimize the potential spread of COVID-19.

Villanueva points out that the ongoing expansion of and improvements to Old School Park will continue contingent on available funds.

The city recently paid to have the old house, garage and fencing torn down at the northeast corner of Fifth Street and Almont Avenue to accommodate expansion of Old School Park.

In recent weeks, DPW staff has graded, placed new topsoil and watered down the portion of the park where the house once stood.

“At this point, we’d like to hear from residents about what they would like to see happen at that park,” Villanueva said.

While she personally envisions constructing a pavilion at the site, other options could include adding more playground equipment or planting shade trees to enhance the park’s overall beauty and ambience.

Regardless, there is an absence of parking at the location, despite having added several new spaces
with the park’s recent expansion.

“I’d be very interested in hearing what the community wants to do there,” she said.

Unfortunately, Villanueva said paying for any new improvements might be a challenge, at least in the near future.

“We really don’t have the money right now,” she said. “And there’s a lot of uncertainty about future funding because of the pandemic.”

Meanwhile, Villanueva said the city’s parks continue to be mowed and maintained to accommodate visitors.

“I would encourage everyone to stop by the Butterfly Garden right now,” she said. “We thank (resident/volunteer) Dr. Jim Sillers, who has been doing a lot of replanting flowers and mulching there.

“Jim has done a great job and it looks beautiful.”