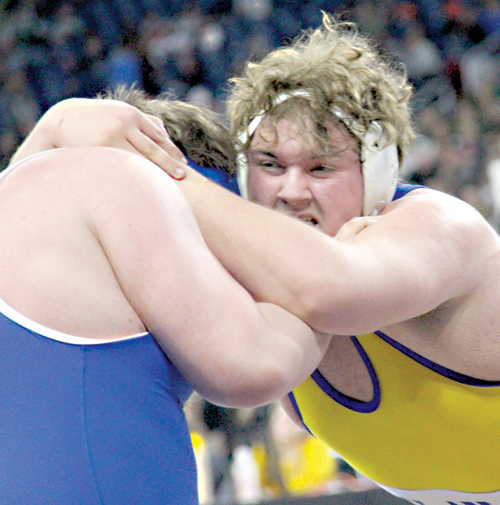 Imlay City heavyweight Joe Harper (R) locks up with a mat adversary during the state finals which took place at Ford Field.

He started his successful senior campaign as a member of the Imlay City football team.

It was there Harper put up solid numbers, finishing with 34 total stops. including a pair of quarterback sacks. He lined up at a nose tackle position.

In addition to that, Harper contributed three forced fumbles, two fumble recoveries, a blocked punt and a blocked PAT to Imlay City’s cause.

“He was an absolute beast at nose tackle,” Imlay City Coach Brian Tresnak said. “Joe put up good tackle numbers despite the fact he was usually double teamed and took up blocks to keep his linebackers clean,” he noted.

With his help, Imlay City finished the year as owners of a 5-4 overall mark.

Harper would enjoy an even better winter campaign wrestling at Imlay City. It was there he went 49-2, registering 34 pins along the way.

He wraps up his high school career with a 153-25 mark, including 103 triumphs via the pinfall route.

Harper has signed to wrestle with Tiffin University’s wrestling program.

Tiffin is a Division 2 school that competes in the Great Midwest Athletic Conference.