During a special meeting on Thursday, June 11, the commission interviewed Rik Hayman, who has served as the City of Burton’s Chief of Staff since 2013.

As Chief of Staff, Hayman handles Burton’s day-to-day operations and is second in command to the city’s elected mayor. 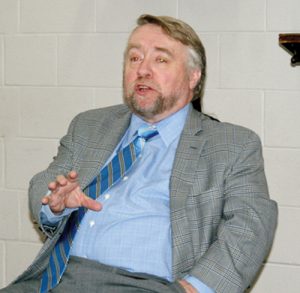 In that capacity, Hayman serves as the city’s primary contact for all departments, the city council, state and federal government, schools, businesses, non-profits, and he acts as Burton’s communications director.

He is former vice president of the Rossman Group, a Lansing-based firm that specializes in management issues, media consulting, litigation, community relations, ballot initiatives and crisis management at the local, state and national and international levels.

Hayman has a background in newspaper journalism, and his military service was as a commissioned officer with the U.S. Army and U.S. Army Reserve.

In response to questions from city commissioners, Hayman said he would feel comfortable with the responsibilities required of the Imlay City position.

“I’m familiar with contract negotiations, have dealt with grievances, am very familiar with budgets and know more about roads, water and sewer than I ever could have imagined.”

When asked about his grant writing skills, Hayman said he had noticed that Imlay City had been making good use of grant funding opportunities.

“My comfort level in that area is strong,” he said. “In Burton, we rely heavily on grants.”

Citing what he believes to be his personal strengths, Hayman noted his people skills and ability to get along well with others.

“I’m a good counselor, a good listener and a team player,” he said. “I realize there are times when tough decisions have to be made.”

Following Hayman’s interview, commissioners discussed the status of the manager search, which has thus far resulted in only five applications and two interviews, the first being Lapeer County’s Chief Financial Officer, Craig Horton, on June 4.

“I’m looking at it from the point that we could have more candidates to consider and interview,” Ramirez said.

Some commissioners continued to express concerns about spending money (about $13,000 for a two-to-three-month search) on a search firm; particularly since the commission now has two viable candidates for the position.

Mayor Joi Kempf suggested that money could be saved by having Imlay City Police Chief Scott Pike conduct background and reference checks on Horton and Hayman, and any others that might emerge as candidates in coming days.

She added that details of a proposed contract being drafted by the city’s personnel committee will be
applicable to either candidate, or others that might be considered.

City Attorney David Churchill opined that the commission’s personnel committee “take a good look at” any other applications submitted.

City Commissioner Ted Sadler reminded that Tom Youatt’s departure is nigh, and that a new manager will have to deal with the financial fallout from COVID-19.

“We’re up against time,” Sadler said. “At the moment we have a couple people we’re feeling comfortable with.”

“We are entering an unprecedented financial disaster in this state and I don’t want to spend money right now.”

In response to Sadler’s concerns about time, new City Clerk/Treasurer, Dawn Sawicki-Franz, said she feels the city will continue to be in good hands after Youatt’s departure.

“We are at the end of our fiscal year, our budget is done and this is not a crazy time for us,” Sawicki-Franz said. “I don’t think we should rush a decision. I feel that our staff is capable and that there is no urgency required.”