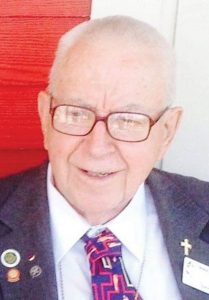 Glenn Hill, 88, of Attica, MI died Wednesday, June 10, 2020 at McLaren Lapeer Region Hospital of Lapeer, MI. Glenn Austin Hill was born May 5, 1932 in McKeeseport, PA. He was the son  of the late Austin
and the late Hilda (Sommervile) Hill. Glenn grew up in Pennsylvania, moved to Detroit, MI for a period of time, and moved back to Pennsylvania at the age of 16. He was a graduate of East Brook High School in East Brook, PA, Class of 1951. Glenn proudly served in the United States Navy from 1951-1955, during the Korean War. He married Carolyn Ebert on June 11, 1954 in Detroit, MI. Glenn and Carolyn have lived in the Attica, MI area since 1990.

He was employed as a machine repairman at various plants for Pontiac Motors before retiring after 30 years. Glenn went on to work at Foamseal in Oxford, MI for a period of time. He owned and operated Mill Street Nursery in Dryden, MI from 1967 until 1990.

Glenn was a member of Dryden United Methodist Church, Dryden/Almont F&AM Masonic Lodge, Dryden Vets, and a former member of the Dryden Fire Department. He and his wife, Carolyn, started Boy Scout pack 142 in Dryden, MI.

Glenn was preceded in death by his parents, Austin and Hilda Hill; his son, Michael Brown; and his brother, George Sarver.
Cremation has taken place. A Celebration of Life and private graveside memorial is being planned for later in July.

Please be sure to sign the online register at muirbrothersfh.com to share condolences and memories with the Hill family.