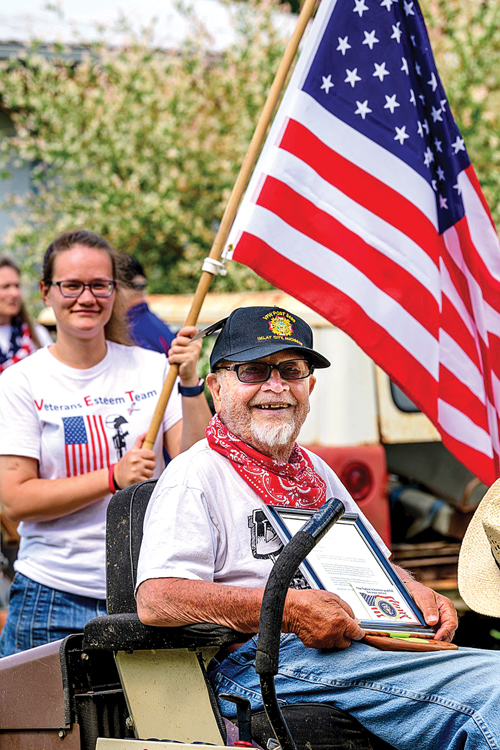 Donald Dick is all smiles after receiving a new hat from the Imlay City VFW Post and a birthday letter from President Trump. Abigail Koning, a member of the Veterans Esteem Team of Lapeer County, is in the background holding the American flag. Photo by Jim Lewis

“It was great,” the nonagenarian said of the day’s events coordinated by his family members and the Veterans Esteem Team of Lapeer County.

After having a gathering with family members that, according to Don’s daughter Delma Robberstad, served as a birthday party and post-COVID-19 celebration, the guest of honor watched the procession from an ATV and sat on his trusty lawn mower during a small ceremony. Family and members of the Esteem Team spoke, the National Anthem was sung and Don was presented with a letter from President Donald Trump.

“He was a little overwhelmed by it all, especially when the Esteem Team was here and they spoke. It brought him to tears,” Delma said.

Phil Hunkele, a fellow Imlay City VFW Post member and former co-worker of Don’s, helped with Saturday’s plans. The two used to carpool together to work.

“Don’s a jolly person. He cracks you up most of the time,” Hunkele said.

“Once you meet him you’ll never forget him.”

Hunkele, who’s also the non-recording secretary for the Esteem Team, said the youth-led group has been wanting to especially honor World War II veterans and, to his knowledge, Don is the only remaining vet of that era
from Imlay City’s
VFW post.

Delma said her dad remains active, spending most of his days mowing the property where he and his family have lived for the past 57 years.

“It’s great that I made it this far,” Don said when asked what it feels like to be 97.

“I’ve gone through a lot of stuff and didn’t even get a scratch.”

Don was a member of a B-25 bomber crew with the Army Air Corp.

Don’s service was highlighted in a May 2009 Tri-City Times story when the then-85-year-old traveled to South Carolina with family members to visit his former crew mate Ferrell Holley.

Holley was a pilot and Don was a tail gunner with the 487th Squadron, based in Corsica, Italy. Their job was to take out infrastructure the Axis powers relied on including railroads and bridges. The two friends flew more than 60 missions each.

Editor’s note: Many thanks to veteran photographers Bobbie and Jim Lewis for capturing great photos of this special day.