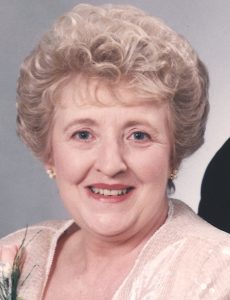 Patricia “Pat” L. Creger, 83, of Almont passed away peacefully Tuesday, June 9, 2020 in her home in Almont, MI. Patricia Louise Creger was born September 5, 1936 in Yale, MI. She was the daughter of the late Ralph and the late Vera (Turner) Justin. She was a graduate of Almont High School, Class of 1955. Pat lived most of her life in the Almont area.

Pat married Robert Creger on January 6, 1956 in Fort Hood, TX while Bob served as a sergeant in the U.S. Army during the Korean War. It was during this time that a union that lasted nearly 50 years formed a foundation that would impact countless lives. Pat would often say that,
“you get out of life what you put into it.” As a testimony of her grit, tenacity, and all-out effort she lived a life filled with fruitful labor. She was pivotal in the formation and success of Tri-County Plumbing and Heating founded in 1965 as well as R&R Sporting Goods founded in 1974. She was monumental in not only having these virtues for herself, but she instilled the virtues of hard work, respect, character and a love for family to her family and friends, as well as to the greater community.

Pat was also someone who understood the balance of working hard and playing hard. She was adventurous, and enjoyed traveling and exploring with family and friends. There are more trips and experiences to note, but above all Bob, Pat and the lively five made their cabin in Lewiston, MI a magical place. She set a foundation, lived life to the fullest, and has left a legacy that will carry on strong.

She was preceded in death by her parents; her husband, Robert W. Creger of Almont; her brothers, Elwood Justin of Scottsdale, AZ, Elmer Justin of Fort Lauderdale, FL; sisters, Donna (Jay) Brown of Sidnaw, Mary (Gordon) Greenman of Pontiac; and cherished grandson, Benjamin Hirschmann of Fraser.

Funeral services will be held on Monday, June 15 at Almont Vineyard Church at 11 a.m. and the viewing will be held from 10-11:00 a.m. Burial will be made in Ferguson Cemetery in Almont.