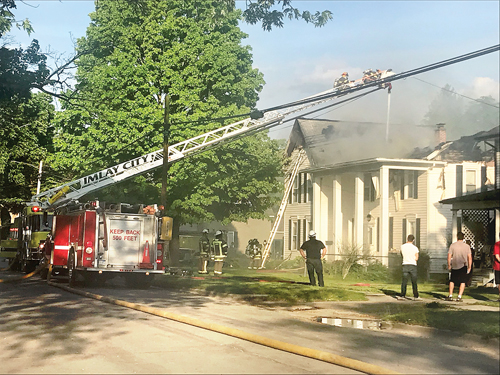 The historic home was built in 1880 and its newest inhabitants, Danielle Clark and Rick Makurat and their children, have only lived there about six months. Photo by Corey Martin

Imlay City firefighters responded sometime around 6:15 p.m. to reports of heavy smoke coming from the attic and roof.

They were assisted at the scene by firefighters from Almont, Attica and Goodland Township, and Imlay City police officers who blocked off the section of Fourth Street for more than four hours.

The stately home was built in 1880, and for many years had been the residence of the late Wes Quimby and his wife, Joan.

The new homeowners, Danielle Clark and Rick Makurat, had moved into the house about six months ago (early November), with the expectation that Imlay City would be their hometown for many years to come.

“We love this house and have been very happy here in Imlay City,” said Danielle.

Ironically, Danielle and the children had been inside the house eating at the time the fire broke out in the attic.

“It wasn’t until our neighbors started knocking on our doors and windows that we knew,” said Danielle. “They were yelling that the house was on fire and that we needed to get out.”