Horton, the only applicant to be interviewed for the post, has most recently been serving as Lapeer County’s interim administrator/controller, since the recent retirement of John Biscoe. 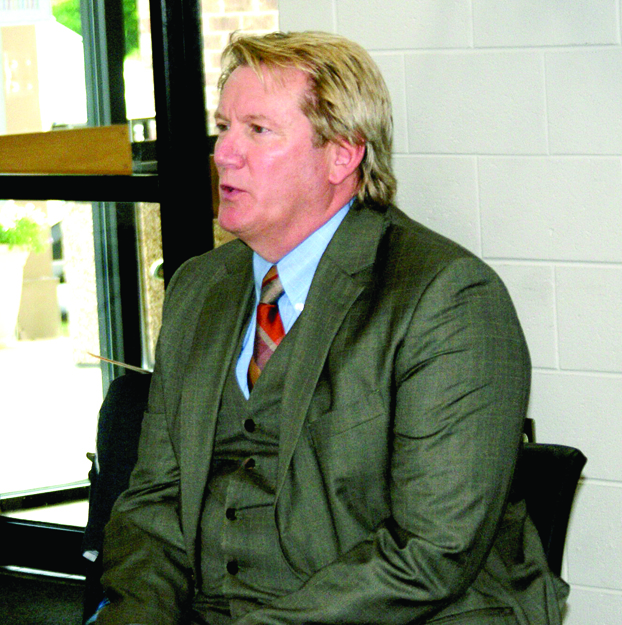 Craig Horton answers a question during his June 4 interview before the city commission.

The city is seeking a successor for City Manager Tom Youatt, who recently resigned and whose last day on the job is June 30.

Horton is one of just three individuals to have responded to a posting on the Michigan Municipal League website.

Members of the city’s personnel committee, which includes Mayor Joi Kempf and commissioners Ted Sadler and Kelly Villanueva said Horton’s resume stood out among the other applicants.

Mayor Kempf noted that Horton’s 30 years of experience, his financial background and timely availability warranted an immediate consideration and an expeditious interview.

Horton told commissioners he would be subject to giving a 14-day notice to the county, which would make him potentially available to assume duties in Imlay City by late June.

Kempf said the ongoing COVID-19 environment may have contributed to the small number of applicants.

She added that the personnel committee discussed the option of hiring an interim manager and/or contracting with a professional search agency to conduct a more thorough search for additional candidates.

“We don’t have a lot of time,” she said. “Even if we extended the search, I don’t think we could find another candidate with as much experience or as strong a resume.”

Sadler said he, too, was impressed with Horton’s resume and his performance during the 30-minute interview.

“I think the fact he has been in Lapeer County for 30 years, says a lot about his loyalty and about the job he has done there,” Sadler said. “I would feel very comfortable in offering him the job.”

Villanueva said she did not favor hiring an interim manager, while expressing her shared support for Horton.

However, Mayor Pro-tem Frank Demske and veteran City Commissioner Al Ramirez voiced concerns about the process of interviewing only one candidate and the urgency of making a speedy decision.

At the conclusion of the discussion Commissioner Stu Davis made a motion, supported by Villanueva, that the matter be referred to the Personnel Committee to negotiate a proposed contract with Craig Horton and present the proposed contract to the City of Imlay City Board of Commissioners for a final decision.

This motion was passed unanimously with a roll call vote.