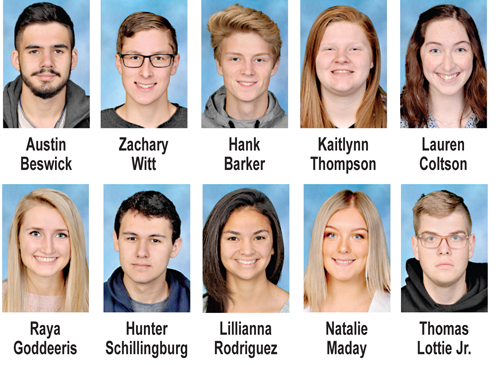 CAPAC — July 26 is the big day for Capac High School graduates. That’s when the Class of 2020 will officially receive their diplomas. Originally, Pomp and Circumstance was due to reverberate through the high school gymnasium on May 18 but, like so many events, those plans were postponed due to the COVID-19 pandemic.

Once that day arrives, Capac seniors will have their chance to finally celebrate their impressive achievements and cheer each other on to find continued success.

The following Capac High School students have achieved academic success in their high school careers and earned distinction as the Class of 2020’s Top Ten.

Austin Beswick, Valedictorian with a 4.0682 GPA, is the son of Nichole and John Galloway.

He pridefully captained the Mock Trial team without neglecting his duties to hangout with bros and cheer vigorously at sporting events. While he greatly enjoyed his role as a morning announcer for the high school, he plans to attend Oakland University for linguistics, not broadcasting. Austin would like to research contextual language usage or work as a primary school speech pathologist.

Zachary Witt, Valedictorian with a 4.0682 GPA, is the son of Kevin and Jennifer Witt and brother to Jacob.

Utilizing his leadership skills Zach served as the President of Student Council, Class of 2020 and National Honor Society. Zach also led as Captain of the Varsity Soccer team and both the Varsity and Junior Varsity Quiz Bowl teams.

Hank Barker, Salutatorian with a 4.0227 GPA, is the son of Scott and Lori Barker and is the older brother to sister Gracie.

Hank has competed in many sports throughout his high school career including cross country, football, basketball, and track and they have helped to keep him disciplined. Outside of school Hank likes to play video games and hang out with friends.

He plans on attending Grand Valley State University in the fall to major in Engineering and then further his education with a doctorate in Physical Therapy.

Kaitlynn Thompson is the daughter of Bob and Cheryl Thompson and sister to R.J. She’s graduating with a 3.9318 GPA.

Kaitlynn’s many school activities have included serving as Vice President of Student Council, Vice President of National Honor Society, Drum Major, and Business Manager of Yearbook. Other activities included robotics, softball, Ski Club and Dance. Outside of school, she enjoys photography and hanging out with her friends.

Kaitlynn plans on attending Lawrence Technological University in the fall and plans to major in Mechanical Engineering.

Lauren Coltson is the daughter of Gary and Michelle Coltson and sister to Ryan, Luke and Aaron. She’s graduating with a 3.9167 GPA.

During her years in school Lauren served as President of the Peer Mediation Team, Section Leader in both Concert and Select Choir, and has performed in the annual musical productions. In her free time she balances work with studying Korean and reading a variety of literature.

Lauren plans on attending the University of Texas at Arlington in the fall to obtain her Bachelors in International Business Administration paired with the Korean Language.

Raya Goddeeris is the daughter of Peter and Karrie Goddeeris and older sister to Reed. She’s graduating with a 3.8810 GPA.

Raya has a rescue dog named Sparkle Paris Goddeeris. Throughout High School Raya participated in cheerleading, National Honor Society, St. Clair Technical Education Center and Ski Club. Outside of school, Raya worked at the Emmett KOA where she was able to explore her passions of organizing and working with children. Raya has received her Certified Nursing Assistant and CPR certificate, which she plans on using while she is completing her college degree.

Raya plans on completing her general education courses at Macomb County Community College before applying to a larger university where she will major in Child Development and Teaching.

Hunter Shillingburg is the son of Eric and Misty Shillingburg and younger brother to Sabrina and Samantha. He’s graduating with a 3.7826 GPA.

During his school years Hunter has enjoyed spending time with his friends. Outside of school he hangs out with his family, plays games, and enjoys various creative activities including baking, drawing, and music. He plans on taking a gap year to consider his future plans.

Lillianna Rodriguez is the daughter of Augustine and Carolyn Rodriguez and older sister to Benjamin Rodriguez. She’s graduating with a 3.75 GPA.

Throughout high school she has been involved with the National Honor Society, Future Farmers of America, Student Council and Four County Community Foundation’s Youth Advisory Committee. She was also on the cross country and track teams for all four years of high school and was a captain of both girls’ teams her junior and senior year, and played on the junior varsity girls’ basketball team her freshman and sophomore years.

Natalie Maday is the daughter of Brian and Kristen Maday and the older sister to Nolan. She’s graduating with a 3.7391 GPA.

Natalie has been a varsity player for both softball and basketball all four years of high school and she has also volunteered with sports programs. In her time outside of school and sports she also works and likes to read.

Natalie will be attending St. Clair Community College to pursue a career in nursing.

Thomas Lottie Jr. is the son of Thomas and Jayne Lottie and brother to Athena and Preston. He’s graduating with a 3.7222 GPA.

Tom has been in band throughout his high school career and has earned the title of Section Leader. He has also attended the St. Clair Technical Education Center for computer programming his junior and senior year. In his free time, Tom likes to play video games and hang out with his friends.

In the fall Tom plans on majoring in Computer Science at Michigan Technological University.