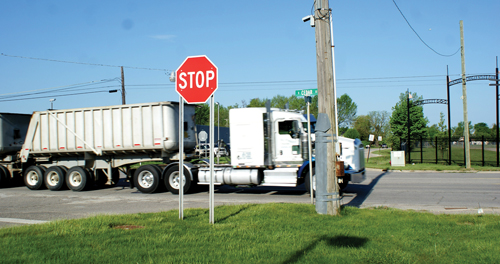 Imlay City officials are concerned that MDOT has postponed installation of a flashing signal at the corner of M-53 and E. Borland Rd. until next year; creating a potential hazard for firefighters accessing the busy highway from the new fire hall.

IMLAY CITY — The Michigan Dept. of Transportation (MDOT) has informed city officials that installation of a flashing traffic signal at the corner of M-53 and East Borland Street will have to wait until 2021.

The City had expected that the requested LED flashing signal would be installed prior to the opening of the new fire hall on East Borland. The signage includes the fire station emblem and a flashing yellow light that’s activated in tandem with the fire siren.

City Manager Tom Youatt said a recent communication from MDOT’s Regional office in Davison said the agency is experiencing staffing issues pertaining to available electricians, and that the Imlay City project will not be bid out until December of 2020.

“I’m very frustrated,” said Youatt. “They’ve been aware of the city’s needs for some time, and that our new fire hall is about to open.

“That traffic signal is vital and has everything to do with ensuring the safety of motorists and of our firefighters as they enter onto M-53 from Borland.

“We are ultimately responsible for the safety of our citizens and firefighters,” he continued, “and this situation is not acceptable.”

Youatt said he has contacted Michigan’s 31st District Sen. Kevin Daley, and 82nd District Rep. Gary Howell in hopes they can encourage MDOT to move forward with the installation sooner, rather than later.

The fire department’s move to the new hall had been delayed earlier because of construction manpower shortages, and more recently to pandemic-related work shutdowns.

Youatt said plans for an early spring “open house” at the new hall have also been postponed until all pandemic restrictions have been lifted.

“We really can’t host an open house for the public with the (social) distancing and other safety precautions still in place,” Youatt said.