IMLAY CITY — Imlay City police, firefighters and Lapeer County emergency crews responded at 1:10 p.m. on Friday (May 29) to the 800 block of N. Van Dyke Rd., where a vehicle had reportedly fallen on an Imlay City man.

Lapeer County Sheriff’s Det./Sgt. Jason Parks reported that Gerardo Ortiz, 49, had been working on a 2017 Ford Fusion in his driveway, when the vehicle came off the scissor-style jack he was using and pinned Ortiz beneath the vehicle. 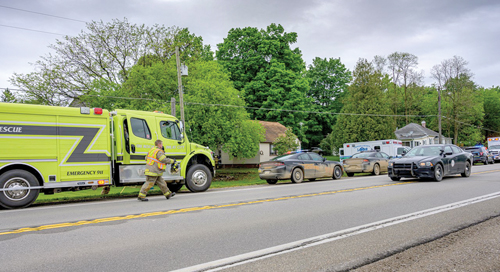 Multiple departments responded to the scene of an accident that claimed the life of 49-year-old Gerardo Ortiz.

Parks said the incident was not witnessed, but that Ortiz’ girlfriend had heard the noise and found him pinned under the vehicle and called 911.

Imlay City Fire Chief Rick Horton said the first-arriving emergency responders were able to lift the vehicle from atop the victim, allowing for his removal.

Horton said LCEMS medical staff initiated CPR on the victim at the scene and he was transported to McLaren Lapeer Region Hospital in Lapeer.

Parks reported that Ortiz was pronounced deceased at 1:51 p.m. within the emergency division at the hospital.

He reminded of the potential dangers of working beneath a vehicle.

“When a vehicle is lifted,” Parks said, “there should always be a secondary support as a precaution to prevent an unfortunate tragedy like this from occurring.”

According to the victim’s obituary, Ortiz was employed at Pinnacle Foods in Imlay City. He’s survived by a daughter, three sons and several siblings.