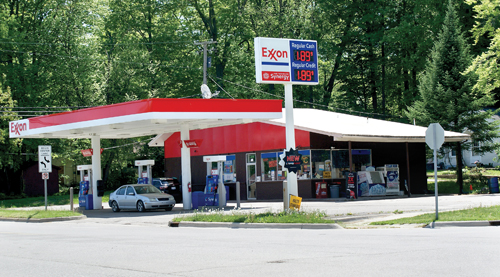 Imlay City Police say the investigation is ongoing and it’s possible other suspects may be involved.

IMLAY CITY — A 16-year-old Imlay City youth has been arrested for breaking into the Exxon gas station at 110 E. Capac Rd. on Sunday, May 24.

Police Chief Scott Pike reported that at around 2:56 a.m., Officer Sara Colin, with assistance from the Almont Police and Lapeer County Sheriff’s deputies responded to a burglar alarm at the gas station at the corner of Capac Rd. (old M-21) and Almont Ave.

“Upon their arrival, they found the glass front door broken and open,” Pike said. “The officer checked the building and found it had been ransacked, but they did not locate any suspects.”

Pike said a Michigan State Police K-9 Trooper also responded to the scene in an attempt to track down the suspect.

During the process of tracking the suspect to an area of N. Almont Ave. and Fourth St., numerous items that had been taken from the gas station were located.

Pike said that at around 1 a.m. the following morning, Officer Colin received information from an Imlay City resident identifying a possible suspect in the break-in.

“With the information provided, Officer Colin and Officer Mike Scigel located the suspect walking in the area of Second Street,” said Pike. “Upon approaching the suspect, he made spontaneous statements implicating himself in the incident.”

Pike said officers transported the juvenile to his home, where an interview was conducted in the presence of his mother.

He added that additional property and evidence were located.

The minor suspect was placed under arrest and lodged at the juvenile detention facility in Bay City, where he awaits a hearing.

Pike said the investigation is ongoing, adding that other suspects may be involved.