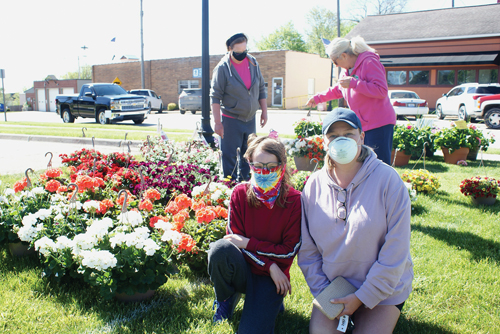 Ten-year-old Mackenzie Bruyere, and mom, Sue, enjoyed getting out of the house on Thursday to enjoy the sunshine and purchase a hanging flower basket from market vendor Linda Penzien.

IMLAY CITY — Mother Nature could not have been more hospitable for the opening of the Imlay City Farmers Market on Thursday, May 21.

With temperatures hovering around 70 degrees and nary a cloud in the sky, large crowds assembled throughout the day at the corner of Main and Third streets.

What they found were lots of people just like themselves, tired of being confined to their homes and eager to get outside and mingle, from safe distances, with others.

It was that search for normalcy and social contact that brought a smile (beneath her mask) to the face of 10-year-old Mackenzie Bruyere, who was checking out Penzien Farms’ hanging flower baskets and other items at the market’s opening day.

Joined by her mom, Sue Bruyere, Mackenzie admitted to having become a little ‘stir crazy’ having to hang around the house for last two months, rather than being at school with her friends and classmates.

“It feels good to be able to get out and be with other people in public again,” said Mackenzie. “It’s been nerve wracking.”

Linda Penzien, a perennial vendor at the Imlay City market, said she had not planned on joining the market this early in the season.

“I’ve been trying to retire for the past five or six years,” Penzien said, “but they just won’t let me do it.

“I do like being here though,” she admitted. “After all the years, I still enjoy doing this.”

Also enjoying the weather and large turnout was Market Manager Katrina Morrow, who was also caught smiling from beneath her mask.

Morrow hopes the strong opening day attendance numbers bode well for the future of the 2020 season, which runs through mid-October.

Crowds also gathered around the displays of Kathy’s Goodies, Dee Kempa of Dee’s Gourmet Cupcakes of Capac and Dave Burdis of Burdis Farms of Brown City, whose tomatoes, peppers, brussel sprouts and other vegetables attracted a steady flow of buyers.

Morrow hopes the number of vendors and attendees will increase in the coming weeks and months.

She reminded that Farmers Market shoppers may avail themselves of assistance programs to include WIC, EBT, Bridge Cards and enhanced ‘Double Up Food Bucks.’

“If you have a Bridge Card, you can get matching free fruits and vegetables discounts with the Double Up Food Bucks,” Morrow said. “In the past you could only match up to twenty dollars,” she said. “But due to COVID, there is now no money cap.”

For more information about the Imlay City Farmers Market or to become a vendor, call Katrina Morrow at the Imlay City Hall at 810-724-2135 or email her at ddapromotions@imlaycity.org.