distribute supplies for those affected by COVID-19

GOODLAND TWP. — Travis Fick of Goodland Township was just looking for a way to help others at the onset of the COVID-19 pandemic in Michigan. Laid off from his design job at the GM Tech Center, Fick decided he wanted to do things like deliver groceries to people who didn’t feel comfortable going to the store but then it became obvious a shortage of personal protective equipment (PPE) was a serious issue so he sprang into action on that front. Since March, he and dozens of volunteers have distributed close to 15,000 masks through Travis’s group, MC19 Relief.
“The whole driving force behind this organization has been that, instead of finger wagging, we decided to stand up and get something done,” Fick said.

Fick has secured donations of extra PPE from businesses that closed, collected monetary donations and organized sewers to help make masks, scrub caps and more. As of early May, MC19 Relief had distributed approximately 15,000 masks, more than 1,500 scrub caps, thousands of face shields and an unknown number of 3-D printed ear savers—those tabs that allow mask wearers to secure the mask other than with their ears. 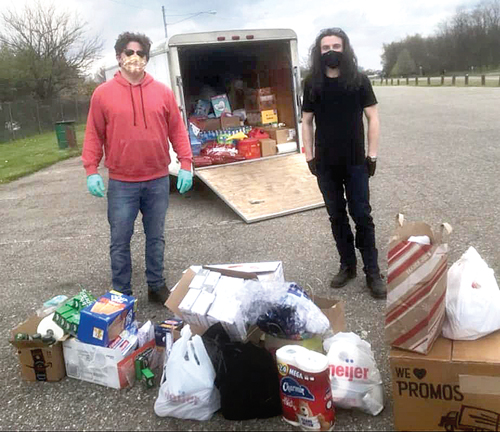 “We’ve helped everybody from EMTs and ER Departments down to police and fire departments and adult foster care homes,” Travis said.

They’re also trying to help those in the general public who need masks to wear in stores. In total MC19 Relief volunteers are still working to fulfill requests for thousands of masks from people and groups throughout southeastern Michigan.

“We have a need for people to process materials, sew, drive and even make phone calls and organize donations– that’s something they can do from home,” Travis said.

Recently Travis’s efforts have extended beyond Michigan too. Last week, he and a friend drove a trailer filled with donated items south to Shiprock, New Mexico. A resident of the Navajo Nation there sent a message through the MC19 Relief Facebook page asking for help in obtaining things like food, water, seeds and even firewood. The virus and related issues have made it difficult for residents of the reservation to get necessities.

Travis has since created a GoFundMe campaign, Food and Relief Drive for Northern Dine, and hopes to make a second trip to Shiprock to drop off donations before June. Last week, Travis put a call out for donations to help residents in the Midland area affected by historic flooding.

Travis’s efforts through MC19 Relief have been profiled in a video created by the United Auto Workers and he was recently interviewed by WWJ news radio about his campaign to help the Navajo Nation in New Mexico.

“It’s been a privilege to be a part of this effort. It’s amplified my faith in humanity just seeing all walks of life come together to help their fellow man,” Travis said.

For more information about MC19 Relief, visit mc19relief.com or find them on Facebook at ‘Michigan Covid-19 Relief.’