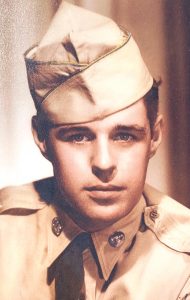 Maurice Wyckstandt, 86, of Imlay City (recently of Oxford), MI died Wednesday, May 20, 2020 at Angela’s House Assisted Living of Imlay City, MI. Maurice Alfonse Wyckstandt was born August 1, 1933 in Roseville, MI. He was the son of the late Alfonse and the late Celina (Brogeveldt) Wyckstandt. Maurice grew up in Roseville, MI. He was a graduate of St. Mary’s High School in Mt. Clemens, MI, Class of 1951. Maurice joined the United States Army and proudly served from 1953 – 1955 during the Korean War as the company clerk. He married Marilyn Louise Meier on February 11, 1956 in Roseville, MI. They moved to Imlay City in 1969 and lived there until recently. He was predeceased by his wife, Marilyn, on April 8, 2019.

He was employed as a stone and brick mason.

Maurice was preceded in death by his wife, Marilyn Wyckstandt.

Cremation has taken place. The family is planning a memorial for a later date.

Please be sure to sign the online register at muirbrothersfh.com to share condolences and memories with the Wyckstandt family.