View ceremony in entirety Sunday, May 31 at 5 p.m.

ALMONT — In the absence of traditional commencement exercises, Almont High School Principal Liz Gallagher described their May 14-17 “virtual” graduation ceremony as a success.

While she still holds out some hope for a traditional ceremony at a future date, Gallagher said that given the circumstances, the virtual graduation seemed the best option.

“We were discussing and researching ways to honor our 134 seniors,” she said, “when we came across some (non-Michigan) schools that were doing virtual graduations.

“The response during and after the event has been overwhelmingly positive,” she said. “Students and parents commented that they felt it was like having their own mini-ceremony and that the day felt very special to them. I know I cried more than once each of those days.” 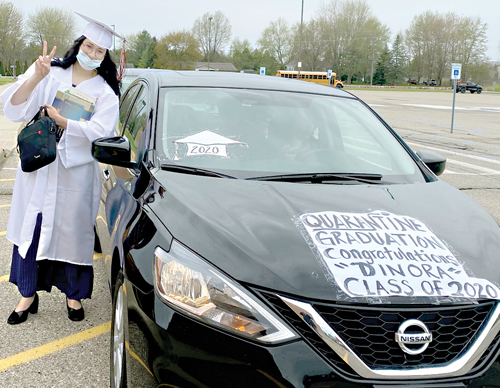 Dinora Manick’s family showed their support for the 2020 Almont grad from the safety of their vehicle.

Gallagher explained that each graduate signed up in advance for 10-minute time slots, during which they could individually walk in their caps and gowns to the sounds of Pomp & Circumstance.

The individual ceremonies took place beneath a tent set up outside the school’s auxiliary gymnasium, where family members were able to watch from a safe distance.

It was Gallagher who presented each student his/her diploma, and that moment was captured for posterity on film and video. She said video captured the moment students “changed their tassels” and “tossed their caps.”

Gallagher added that many of the traditional graduation speeches were recorded, as were senior Danielle White’s rendering of the National Anthem, and senior Monica Latcha’s performance of “Rise Up.”

She said even the week’s frequent rainfall could not deter organizers, volunteers, students and parents from doing their parts to make the event a success.

“Due to the rain, we put up tents for the families to watch from, and students were escorted to the tent under umbrellas,” Gallagher said. “We only had a skeletal crew on hand each day, but we were able to get 127 of our 134 to participate.”

Upon completion of the virtual event, all of the recorded video, photos, speeches and music were submitted to Rock The House Productions to produce and edit for streaming and mass viewing.

Gallagher said the completed production will be available for viewing on Almont Schools’ Facebook page, the district’s website and YouTube channel to be downloaded and forever preserved on Sunday, May 31 at 5 p.m., the day and time the 2020 graduation was scheduled to have taken place. A link will be posted at 4:30 p.m. on May 31.

Schools Supt. Dr. William Kalmar offered his and the school district’s sincere and heartfelt thanks to the individuals and organizations that made the 2020 “virtual” graduation ceremony possible.

“Many of these individuals put in four or five 10-hour days in succession to pull off this event,” Kalmar noted. “We all owe them our thanks and gratitude.