Our country has faced many health challenges over the years. In the early part of the 20th Century it was tuberculosis. The current coronavirus pandemic, and the resultant issues of testing and contact tracing brings to mind the story of an Imlay City native, Susie Desk. It is also with Memorial Day in mind, that I would like to tell her story. 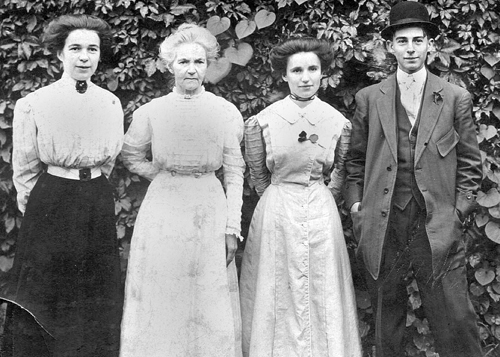 Susie Desk, second from right, is pictured in 1906 with her sister, Carrie Desk (left), mother Mrs. Samuel Desk and an unidentified man.

In 1916, State of Michigan health authorities undertook a survey to find unsuspected or concealed tuberculosis by systematically examining large numbers of people. During the first week 11,528 persons in a population of 1,319,283 were examined and 2,914 positive cases discovered.

Altogether 44 percent were found to have clinical tuberculous or potentially such. Naturally these people voluntarily sought advice or were persuaded to undergo examination because of suspicious symptoms. The results were not surprising. They simply confirmed well-established facts concerning the prevalence of infection. In 1916 the state board had issued a four-page leaflet entitled “Treating Tuberculous at Home.” It was sent free of charge to all households.

The Imlay City Historical Museum archives include a collection of photographs taken by Susie Desk as she traveled throughout Michigan as part of this survey. Ms. Desk graduated from Imlay City High School in 1901. She then worked for a period of time at the local telephone office and then moved to Flint for work.

In September of 1911 she entered the training school for nurses at St. Mary’s Hospital, Detroit. She graduated on June 3, 1914 upon completion of the three-year course and remained in Detroit to work in the nursing field.

On January 13, 1916 she received notice of her appointment to the staff of nurses of the State Board of Health and left for Battle Creek to begin her new labors with the field division engaged in tuberculous work throughout the state. This appointment came to Miss Desk entirely unsolicited and was a fine tribute to her professional standing as a nurse.

On April 6, 1917, the United States entered World War I and Susie Desk was sent to France with one of the first contingents of nurses. She was assigned near the front lines with the Harper Hospital Unit. She served with distinction at Base Hospital No. 17 from July 1917 when she landed in France until March 1919, three months before the war officially ended with the signing of the Treaty of Versailles. She served on six different fronts, including Chateau Thierry and St. Mihiel and belonged to a “group” that was twice cited for bravery. A “group” was composed of two doctors and three nurses. Another Imlay City nurse, Grace Quirk, was also stationed in France.

In March of 1919 she returned to Imlay City from France and shortly thereafter went west to the state of Washington where she met her husband, Lester R. Swarts. They were united in marriage on February 21, 1920 in Olympia, Washington. Later she moved to Albuquerque, New Mexico. She died on August 31, 1933 in Los Angeles where she was taken for treatment after becoming ill.

Her remains were brought to Imlay City and a funeral was held at the home of her sister, Mrs. Walter C. Schoof. Military honors were paid her at the Imlay Township Cemetery by the Harry F. Hovey Post of the American Legion of Imlay City under the direction of Commander Leslie Matthews.

If you would like to view Susie Desk’s scrapbook of photos from the TB survey, stop by the museum any Saturday afternoon and enjoy her photo journey. The museum is currently closed but plans to open soon depending on the Governor’s executive orders. Watch for an opening date announcement in the Tri-City Times.