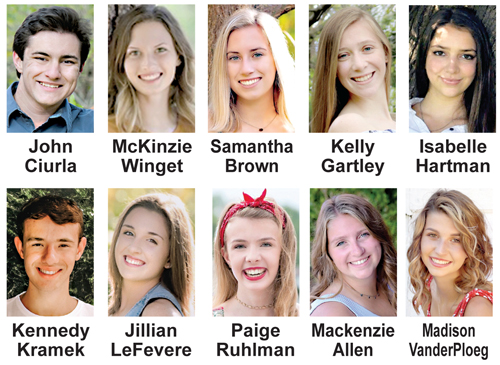 IMLAY CITY — It’s tradition for family and friends to file in to the Imlay City High School gymnasium every spring to see the graduating class receive their diplomas. Because of the COVID-19 pandemic, those ceremonies will look different for the Class of 2020.

This year commencement will take place at the Eastern Michigan State Fairgrounds on July 19 in a drive-in style event.

On that day, the graduating class will have the chance to celebrate their past achievements and offer well wishes for the future.

The following Imlay City High School students have achieved academic success in their high school careers and earned distinction as the Class of 2020’s Top Ten.

The Imlay City High School Class of 2020’s Valedictorian is John Ciurla, who carries a 4.00 GPA. John is the son of Michelle and John Ciurla of Imlay City. He has been on the “All A’s Honor Roll” during his entire high school career. John is a member of the Robotics team, National Honor Society and the varsity Quiz Bowl team. He will begin his studies at University of Michigan-Flint where he will major in Chemistry. He plans on transferring to University of Michigan- Ann Arbor, where he will complete his studies as a Chemical Engineer. The most influential person in his life is Lance Long, former NFL player. He has been greatly inspiring, teaching many valuable lessons that carried John through life and put him on the path to success.

The Imlay City High School Class of 2020’s Salutatorian is McKinzie Winget, who carries a 4.00 GPA. McKinzie is the daughter of Karen and Kirk Winget of Imlay City. McKinzie has participated in cross country, track and was named team captain, most improved and first team all-conference in both sports. Aside from sports, McKinzie is a member of the National Honor Society and the Environmental Club. In the fall, she will be attending Nova Southeastern University to pursue a Bachelor of Science in Nursing. She will be competing in cross country and track for NSU. Her mother is the most influential person in her life. She is the strongest person McKinzie knows and has taught her all about perseverance.

Samantha Brown has attained a 4.00 GPA over her four years of high school. She is the daughter of Gretchen and Robert Brown of Imlay City. During high school Samantha has participated in softball, National Honor Society and Spartan Nation. She has received the citizenship and All-Academic softball awards. Samantha will be attending Michigan State University in the fall to study Interior Design. The most influential person in her life is her mom. She believes in Samantha, always pushing her to do her best and knows she will always be there to support her.

Kelly Gartley has earned a 3.98 GPA during her high school career. Her parents are Karen and Thomas Gartley of Attica. She has participated in cross country, track and field, bowling, Spartan Marching band and The Veteran’s club. She is the National Honor Society secretary, and has chaired blood drives at Imlay City High School. Kelly will be attending University of Michigan-Flint where she will begin her studies to become a Dermatologist. The most influential person in Kelly’s life is her sister who joined the Navy and continues to amaze Kelly with her accomplishments.

Isabelle Hartman has earned a 3.98 GPA during her four years of high school. She is the daughter of Andrew Hartman of Lapeer. She has participated in National Honor Society, and the National FFA organization. While a member of the FFA organization, Isabelle has received the Greenhand Degree, State Degree, 1st place team in the State Veterinary Science competition and 1st place team in the Broiler Contest. Isabelle plans to attend Macomb Community College applied science program. She plans to transfer to Michigan State University to get a bachelor’s degree in zoology, and then apply to the veterinary school. Her dad is the most influential person in her life. He has taught her some of the things she values most.

Kennedy Kramek has earned a 3.98 GPA during his high school career. He is the son of Cindy and James Kramek of Imlay City. Kennedy has participated in tennis, bowling, basketball, baseball and Drama. Kennedy was voted by students and staff as the winner of the Daughters of the American Revolution Good Citizen Award for his dependability, service, patriotism and leadership. This fall, he will attend Michigan State University where he will study Construction Management. The most influential person in Kennedy’s life is his father. He is a good role model and has dedicated his life to improving the lives of his family.

Jillian LeFevere has earned a 3.98 GPA during her four years of high school. She is the daughter of Dawn and Michael LeFevere. Throughout high school, Jillian has participated in track and field, National Honor Society, powerlifting, Wind Ensemble and Spartan Marching Band. After graduation Jillian plans to attend Oakland University to study Pre-Medicine. The most influential person in Jillian’s life has been her parents, they have always supported her and have always been there for her.

Paige Ruhlman has earned a 3.96 GPA during her high school career. She is the daughter of Amy and Jerry Ruhlman of Attica. During high school, Paige participated in competitive cheerleading, sideline cheerleading, Student Council, National Honor Society, Environmental Club and Recycling Club. She received the All-Academic Team and All-Conference First Team awards and the BWAC All-League Honorable Mention for competitive cheerleading. Paige will be heading down south to attend Nova Southeastern University to study Marine Biology. The most influential person in her life is her grandma. She is always there for her to talk to, and she always cares. Her grandma worries about her going to college so far away but is still supporting her so she can fulfill her dreams.

Mackenzie Allen has earned a 3.98 during her high school career. She is the daughter of Susan and John Allen. Throughout high school, Mackenzie has participated in volleyball, basketball, tennis, National Honors Society, Spartan Nation, Wind Ensemble, Spartan Marching Band, drumline, Drama and she attended Girls State. She plans on attending Frederick Meijer Honors College at Grand Valley State University in the fall. She will study Biomedical Sciences with a concentration in Pre-Medicine. The most influential people in Mackenzie’s life are her parents and her brother, Mitchell.

Madison VanderPloeg earned a 3.90 during her high school career. She is the daughter of Wendy and Scott VanderPloeg. Madison is the class council Vice President, and Vice President of the National Honor Society. After graduation, Madison plans to attend Central Michigan University where she will study Pre-Medicine with the ultimate goal of becoming a psychiatrist. She would like to thank all of her family, friends and teachers that have encouraged her throughout her life.

A note from Imlay City High School administrators: A large number of schools no longer use the traditional classification of Valedictorian and Salutatorian; many other schools are moving in that same direction. At Imlay City High School, we believe the distinction to be an important one, and one worthy of recognition. In 2007, the guidelines for qualification and selection for these distinctions were reviewed to emphasize performance on the ACT or SAT examination and to reward students for attempting the most rigorous course schedule possible. The guidelines were designed to more closely align them with those used for special distinction at the university level through the Phi Beta Kappa system. This system was also adopted by the Detroit News Scholar program and is currently used by the Blue Water Area Conference to determine its highest academic honors.

Many thanks to Imlay City High School’s Fran Weingartz and fellow staff for compiling the Top Ten feature.