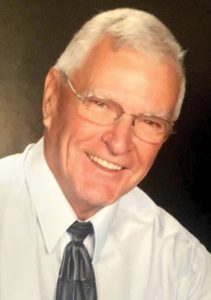 Robert Owen, 82, of Imlay City, died Friday, May 8, 2020 after a short illness at McLaren Lapeer Region Hospital. Robert Clay Owen was born January 4, 1938 in Lapeer, MI. He was the son of the late Lloyd and the late Dorothy (Wildey) Owen. Bob grew up in the Lapeer and Columbiaville areas. He attended Kearsley High School in Flint, MI. Bob joined the U.S. Navy right out of high school. He served from 1955 – 1959; he was stationed aboard a destroyer. He married Susan Ann Buike on May 16, 1964 at St. Paul’s Lutheran Church in Imlay City, MI. Bob started working as a truck driver for Crowell Trucking in Almont; worked as a sales representative for Champion Bus and Motor Home in Imlay City for 20 years; worked for L & L Products in Romeo; and the “best job of all” was as a parts delivery driver for Dodge & Sons NAPA Parts Store in Imlay City which he did throughout his retirement years.

Bob loved to fish, golf and hunt; he especially enjoyed going to the Upper Peninsula to the Buike family cabin in Newberry. Bob was a member of St. Paul’s Lutheran Church of Imlay City and the Imlay City American Legion Post # 135.

He is survived by his wife, Susan Ann Owen; his daughter, Jill Owen of Allen Park, MI; his son, Jason Owen of Lapeer, MI; his brother-in-law, Earl Crowel of Almont; his grandchildren, Cory, Kyle, Colin and Kaleigh; and his great-grandchildren. Also surviving are his beloved in-laws; nieces and nephews; cousins; and many good friends.

A memorial service / celebration of life and a Veteran’s Final Salute will occur at a later date (up-dated information will be posted to the funeral home website). It is being planned that Bob’s cremated remains will be interred at Great Lakes National Cemetery in Holly, MI later this summer.

Please be sure to sign the online register book at www.muirbrothersfh.com to share your memories and condolences with the Owen family.