Abbreviated ceremony to include gun salute and Taps

DRYDEN — The Dryden Vets organization has canceled its annual Memorial Day parade, but still plan to conduct an abbreviated ceremony on Monday, May 25.

The ceremony will include a traditional wreath-laying and gun salute at Mount Pleasant Cemetery, starting at 10 a.m. 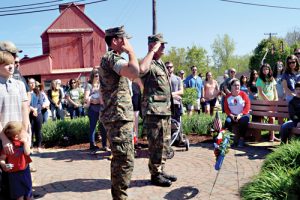 Dryden vets salute after placing wreaths near the monument at Memorial Park last year. For 2020 the parade and park ceremony have been canceled but a salute will take place at Mount Pleasant Cemetery.

Dryden Vets spokesperson, Spencer Kent, said the program will conclude with the playing of “Taps” by Dryden student, Ava DeVlaminck.

“Ava played for us last year and she did a beautiful job,” said Kent. “We are thankful that she is willing to play for us again this year.”

In keeping with COVID-19 safety protocol, those wishing to observe the ceremony are invited to drive by, while remaining in their vehicles.

Kent asked that residents getting out of their cars to visit veterans’ graves, please observe appropriate social distancing and other safety protocol.

Dryden Police Chief Shawn Peters said officers will be present to keep a watchful eye over the proceedings.

“We’ll be there in case of a traffic logjam,” Peters. “We fully expect that everyone will be very respectful of one another.

“Typically,” he said, “several hundred people turn out for our Memorial Day activities. A lot of them come out for the parade and then go to Memorial Park and the cemetery.

“It’s unfortunate all of that will not be happening this year.”