ATTICA — Hali O’Donnell has a gift for turning scrap metal into beautiful pieces of artwork. She didn’t always know that she was an artist. She started out on the path towards nursing before finding her passion for metal artistry.

“In 2012, I had been through a couple jobs already trying to figure out what I want to do with life. Still feeling rather lost, I decided to sign up to be a medical assistant, because I wanted to eventually become a nurse. I absolutely loved the learning portion. I felt lucky to catch on to this since my previous school years were terrible. I was not good in school so this was a huge deal for me,” Hali shared.

She thought she had finally found the career meant for her and was happy to get a job at a doctor’s office but the pace of the work and health issues became too much.

“After that, I decided I was done with the medical field,” Hali said.

After exploring her options, Hali decided to work for her Dad on the farm. 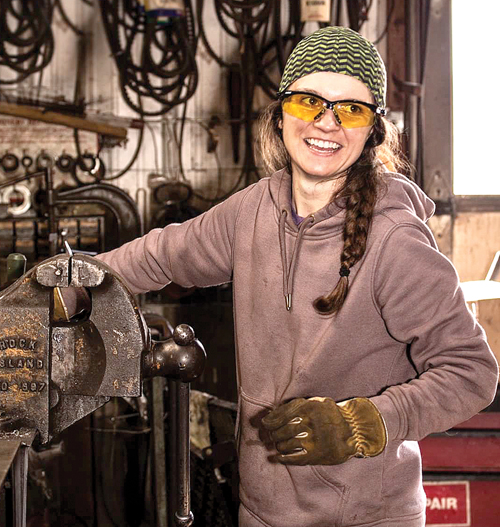 All it took was a four-minute welding lesson from her dad and Hali O’Donnell fell in love with making things from metal. Her first project was a chair that she gifted to her dad.

“I thought going back to the basics would be a safe path to take compared to what I just went through. Everyone should learn where their food comes from and just how hard farmers work. This turned out to be one of the best decisions of my life because not only do I get to farm, I also get that time with my dad and I think he appreciates it too,” she explained.

Her time on the farm led her to finding a new passion—turning scrap metal into art.

“As I was working on the farm I would have a little bit of free time before I learned how to harvest. So, I would walk around the farm and pick parts out of the scrap bin. I was determined to make something even though I had never tried. Eventually I decided on making a chair. I had all the parts gathered and asked my dad if he could give me a quick lesson on the welder. Literally, after a 4 minute lesson, he sent me on my way. By the time he came back from harvesting wheat that day I had a chair made that he still sits in to this day.”

Hali said that gave her the confidence to keep going and see what other metal art she could create.

“I have had health issues in between all of this and had to take a few years off but now that we finally know what’s wrong, I have the pain managed to the point I can weld again. My dream is to make a career out of this,” she said.

Hali enjoys creating a variety of designs from the scrap metal that she finds. Her favorite designs include owls, fish and flowers.

“There is no set way for any of them which makes the process less of a process and more of an opportunity for creativity. I can add as little or as much detail as I want to each piece. I personally love all things tacky when it comes to decor, so the wilder the feathers or scales look I enjoy the heck out of that. Customers seem to appreciate it too which is a nice feeling,” Hali explained.

Hali is always on the lookout for old, used scrap and she collects a lot from around her dad’s farm.

“Around 70% of my scrap hoard is from around the farm. Anything from junk washers, gears, to old tractor hoods. The rest comes from auctions, friends who work on vehicles or just have a pile in the garage to get rid of, and garage sales. Anywhere I can find a deal.”

Hali hopes her work will be encouraging to girls and women.

“I’ve been a firm believer that women can be so much more than we have been told in the past. I make things to make people smile and feel emotion, but overall I hope to inspire young girls to break out of the box. Don’t be scared!”

“I wish I would have known in school that not everyone is meant for college. They really pushed that agenda hard and I feel like I wasted a lot of time trying to fit in that box,” Hali recalled.