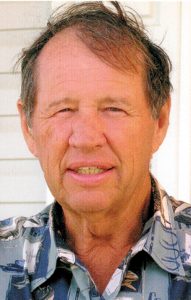 Richard “Dick” Davis of Winter Haven, FL passed away on Saturday, April 18, 2020, in the comfort of his home.

He will be remembered as a hard-working and friendly family man. Always happy to lend a helping hand, engage in conversation, or encourage with a thumbs up. His laugher was infectious as was his smile. To paraphrase Yeats, “There were no strangers; only friends he hadn’t yet met.”

Dick was born on August 9, 1942 in Flint, MI to Rex and Neva Davis. He grew up in and around the Flint area and when he was a teenager, worked on a farm shearing sheep and working in the fields to support his parents. This early exposure to the farming life left a lasting impression that would be one of the passions of his life. Of course, his greatest passion was his wife and family. On July 14, 1960, he married Janet and then in 1964, they moved to Almont, MI where they raised their four children together.

In his 46 years of living in Almont, he worked mostly as the operator/ mechanic at both the Dryden gas station and the old Boron gas station in Almont before returning to his roots to operate his dairy farm until 1997. In semi-retirement, he continued to work as a mechanic for Almont Community Schools.

Throughout his life, Dick was always willing to give back. He was a volunteer deputy for Dryden township and part of the Lapeer County Sheriff’s Posse. He served as President of the Almont Athletic Boosters, the Eastern Michigan Horse Association, and was an active member of the local Lions Club.

While in retirement, he picked up two passions; roping and golf. He won two championships in Team Roping as a heeler in the Michigan Ropers Association and one club championship at Carefree Country Club in Winter Haven, FL. If you asked him about either he was sure to give you a few tips or pointers!

Dick was preceded in death by his father, Rex; his mother, Neva; and his brother, Don. He is survived by his wife, Janet; his four children, Rich, Deb (Pat), Tim (Valentina) and Mike (Carly); his brother, Buddy; his grandchildren, Josh, Tina, Jordan, Laney, Sophie and Ashlyn; and his great-grandchildren, Nick and Emmaline.

An online celebration of his life will be held on May 2.