Almont Legion decides to suspend, others expected to follow

ALMONT — The Almont American Legion has joined other local veterans organizations in canceling 2020 Memorial Day ceremonies scheduled for Monday, May 25.

Almont Legion Post 479 Commander Dick Bowman attributed the cancellation of the traditional ceremony at Burley Park to uncertainty about the longevity of the COVID-19 virus and the anticipated necessity for social distancing and other safety protocols in the future. 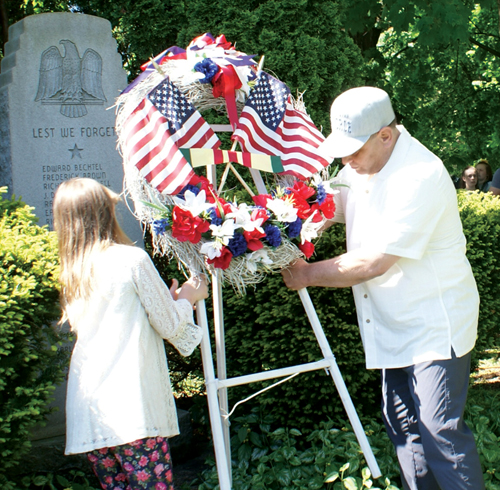 A ceremonial wreath is placed in front of the veterans memorial at Burley Park during last year’s Memorial Day ceremony.

For many years, the Almont Legion had hosted the traditional Memorial Day ceremony at the park, followed by a community gathering at the former post home on School Street.

“We’re still going to observe Memorial Day and remember those who sacrificed their lives for our country,” said Bowman. “But we’re just not going to be able to do it as we had in the past.

“It’s about public safety,” he said. “We don’t want to endanger anyone’s health at a time when people are being asked to shelter safely.”

He added that Legion members will also maintain their tradition of laying American flags on the graves of local veterans buried at cemeteries throughout Almont Township.

“We’ll just do it differently by driving separately to the various cemeteries and observing social distancing during the process.”

Bowman pointed out that the American Legion has canceled this year’s National Convention, along with its participation in Boys State, Girls State and community baseball programs.

Last October, Post 479 members agreed to sell the former post home at 117 School Street, because of reduced membership and the mounting costs of building maintenance and operations.