IMLAY CITY — After weeks of speculation as to what their future plans will be, the Imlay City Boys Baseball Board has decided to call off their upcoming season.

That decision was made official this past weekend in an announcement by Imlay City Boys Baseball.

“I write this today with a very heavy heart,” Imlay City Boys’ Baseball President Neil Collins said. “I don’t recall a summer without baseball,” he noted.

“But, due to the continued extensions of the Governor’s Executive Orders, I regretfully announce the cancellation of the Imlay City Boys Baseball 2020 season. 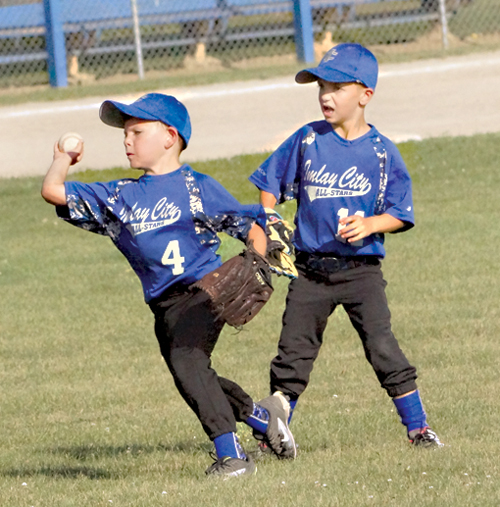 Imlay City’s Nolan Siegler throws the ball to the infield as Landon Nadrowski looks on in a game last year.

He stated it was not something he wanted to do, but the circumstances dictated the move.

“Trust me when I say the decision did not come easily,” Collins said. “After numerous conversations with state and local officials I have chosen to make this call,” he noted.

“The health and safety of our youth must take top priority. Also, the ability to provide a safe and fun season continues to be compromised with further delays in opening our local economy. Please remember all the local businesses that continued to support our league over the years. Please help support them as they open back up.”

Collins said refunds for all fees paid will be provided over the coming weeks and patience is greatly appreciated as the league works through this difficult time.

“Again thanks to all the players, parents and sponsors for making Imlay City Boys Baseball a great league,” We will be utilizing this time to make improvements and better our league to prepare for our 2021 season. If we are able, we may try and hold some training camps later in the summer.”