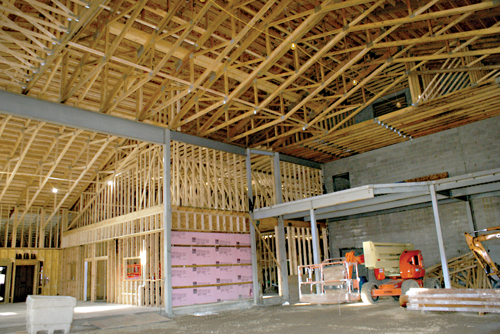 An ongoing expansion project at the business was spared damage from the October 2019 blaze that forced the business to close for repairs.

ALMONT TWP. — Country Smoke House owners Steve and Sue Francis had envisioned a spring reopening for the business which sustained significant damage during a fire on October 4, 2019.

The owners now say the reopening is “on pause” due to uncertainty about the duration of the COVID-19 virus.

“We, too, aim to prevent the spread of COVID-19,” Francis family members stated on their Facebook page. “At this time, we are unsure of our opening date.”

Meanwhile, the family urges everyone to follow designated protocol to help bring the swiftest possible end to the spread of the disease.

“We can flatten the curve together,” the Francises said. “Stay strong, stay home and pray for our healthcare workers, ill victims, grocers and all essential workers.

“We greatly appreciate each and every one of you, words could never express just how much. God Bless each of you; may he keep you strong mentally, physically and virus free.”

It was shortly after midnight last October 4, that firefighters from six local departments responded to a reported structure fire at 3294 Van Dyke (M-53).

By the time the blaze was extinguished, about 90 percent of the building’s roof, retail space, storage and meat processing areas had been destroyed or seriously compromised.

As a result of the fire, dozens of employees found themselves out of work at the Country Smoke House’s busiest time of the year.

An investigation of the fire conducted by Michigan State Fire Marshals, insurance investigators and the Almont Twp. Fire Dept. revealed that the fire began in a commercial clothes dryer vent and spread to the roof of the building.

Fortunately, an ongoing expansion project to accommodate a new USDA licensed meat packing facility at the location was spared of fire damage.