“Steve was a great husband, father, grandfather, neighbor, farmer and friend,” Daley said of Kingsbury, who passed away suddenly on Thursday at the age of 63. 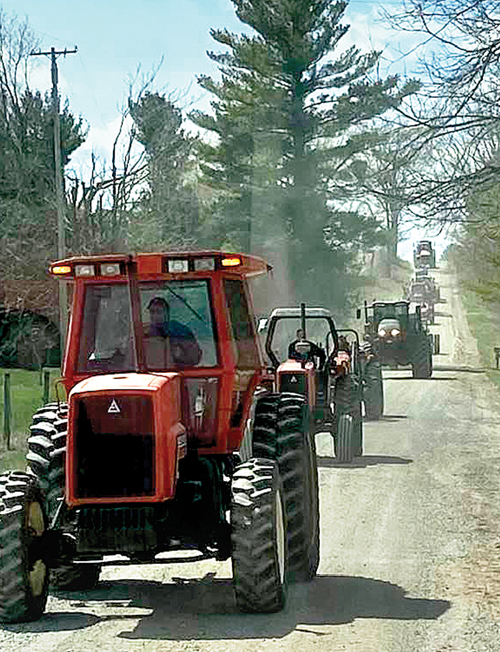 Monday’s tractor parade approached the Kingsbury farm from the west on Haines Road.

Daley said Steve was one of the first people to call him after Daley’s own personal losses, like the deaths of his father and son.

“I get choked up just thinking about it,” Daley said on Monday afternoon before the parade began.

“It’s just so hard. Because of what’s going on, you can’t give his wife or family a hug.”

Since the COVID-19 outbreak, large gatherings are not being allowed and that has applied to funeral home visitations and services.

Members of Kingsbury family were slated to gather on hay bales on a wagon parked in the farm’s front yard to watch the procession. Daley provided a tub on the road’s shoulder near the Kingsbury’s driveway for participants to deposit cards.

The parade included tractors of all makes and models, other farm implements, trucks, cars and more.

In a Facebook post following the event, Daley thanked those who participated “to show respect to their fellow farmer.”

Kingsbury was a 1974 graduate of Imlay City High School and lifelong farmer. He is survived by his wife, Kim, four children and six grandchildren.