Wetzel, Schriber and Verellen see court time for 16U team 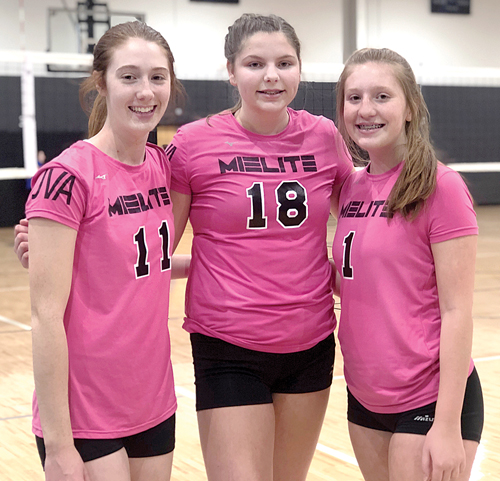 IMLAY CITY — Imlay City ninth-graders Drew Wetzel, Hope Schriber and Cassie Verellen, all of whom saw action on the Imlay City junior varsity volleyball team this past fall, wrapped up their respective seasons with the Michigan Elite National Select 16U team recently.

The squad competed in the Michiana Open Power League and finished their campaign as owners of a 7-10 overall mark. That left them 26th out of 57 teams (teams in the league come from all across the state and as far north as Traverse City). The league plays their matches in Detroit, Pontiac and Grand Rapids.

Their most recent tournament was March 7-8 at the Detroit Great Lakes Festival. A total of 60 teams competed over three divisions there.

Michigan Elite National Select played in the highest division, but encountered a tough weekend. They wound up with a 1-4 showing, good for a 15th among 16 entries in the 16U Club Red Division.

The team also tested their court skills at the Presidents Day Challenge in Detroit.  That event took place in February.