Rotation was detected but
no tornadoes reported

TRI-CITY AREA — The National Weather Service reports thunderstorms that rolled through the Tri-City area on Tuesday night exhibited rotation but there weren’t any confirmed reports of funnel clouds or tornadoes. Still, many residents and businesses experienced significant property damage from the hail that fell from the sky that night, some of it golf-ball sized.

Dozens of readers have shared storm reports, photos and video of the actual storm and it’s aftermath with the Tri-City Times. According to those submissions, it appears that the largest hail fell in places like Arcadia and Goodland townships with damage reported from residents in Attica, Imlay and Mussey townships too. The hail left holes in siding, cracked windshields, broke home windows and skylights, caused dents in metal roofs and more. The next day, several residents reported that holes and dents in their yards were evident too. 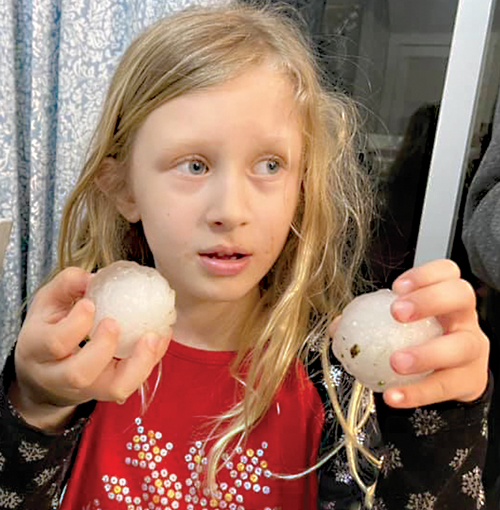 Mia Moenaert shows off the golf-ball sized hail that fell outside her family’s Lum area home on April 7.

Meteorologists from the National Weather Service office in White Lake said Tuesday’s storm was considered the first severe weather event of the 2020 season. They noted it was apparent severe weather was likely sometime that day thanks to the weather pattern.

“The Storm Prediction Center included most areas south of the I-69 corridor in an Enhanced Risk for severe thunderstorms,” the Weather Service stated in a storm summary posted online.

One of the factors that created instability in the atmosphere was a warm front that moved in from the south that afternoon.

“A warm front draped along the Ohio border quickly surged northward towards the I-69 corridor heading into the afternoon hours on the heels of increasing southerly low-level flow. Areas north of the warm front that were only in the 40s quickly jumped well into the 60s and even low 70s in spots,” the summary noted.

The report stated that the hail that fell in many locations was dime- to quarter-sized.

Warm temperatures persisted into Wednesday but by Thursday, more white stuff was falling out of the sky, thanks to scattered snow and “graupel” showers and highs in the 40s. The service’s White Lake office measured one-tenth of an inch of precipitation that day.

On Monday, the Weather Service issued a high wind warning, with gusts expected to reach 50 miles per hour. Fortunately, there weren’t reports of widespread power outages.